A Double-crested Cormorant was busy just off our patio yesterday morning. It was being followed around the perimeter of the lake by a three herons: A Tricolored, a Little Blue, and a Snowy Egret. They were feeding on small fish that the cormorant was probably scattering about as it dived. As I have seen happen several times before, the Snowy Egret actually flew out to where the cormorant was working underwater and, on the wing, appeared to skim small fish from the surface of the water. Once, we observed as a Great Blue Heron waded into deep water and then actually swam like a swan as it continued to hunt for dinner.

This morning I read a post on FLORIDABIRDS from fellow Florida pond-watcher Jean Williams  that included another twist on the behaviors of herons and cormorants. Jean said, “(T)he Herons and Egrets that frequent my pond are certainly doing their part to keep me entertained - particularly lately the Great Blue Herons.”

“Yesterday a Great Blue was walking the pond’s edge, and got to within about 8′ of a gator - about 5 feet or so long.  The Heron decided that he wanted to keep walking and wasn’t going to fly by like they typically seem to - so he squalked and charged the gator - who immediately got up and moved about 10′ up the bank away from the Heron, who happily strolled on by.  Heron 1 - Gator 0.  “Today - a Great Blue was fishing in one of their best fishing spots, directly across the pond from my house - a Great Blue Heron and a Great Egret had been following a Double Crested Cormorant around the pond - a behaviour I see often.  But then I saw a new one…   I’ve often seen when a Cormorant catches a fish, the Herons and Egrets dive-bombing the Cormorant to get the fish (and also on my pond lucky enough to see a Wood-Stork and a Bald Eagle engage in this same activity), but this one was new.  The Great Blue Heron caught a fish, and here comes a Cormorant from under water, and flys out of the water at the Great Blue attempting to steal the fish!  I’d never seen that one before.  He was unsuccessful, and the Great Blue finished his meal…”
comments (0)
Tibetan Mastiff Puppy
Filed under: General, Grandchildren, Illinois
Posted by: Ken @ 10:33 am This is the hopeful beginning of a happy sequel to the story of Maceo, the big Doby/Lab mix whose loss was felt so deeply by our two Illinois granddaughters. Now they have a new family member, one of a rare breed, a Tibetan Mastiff named Agramonte (officially, Washaniâs Calixto Garcia y Agramonte). Students of history (and Googlers) will detect a trend in the names of the family dogs– Maximo, Maceo, and now Agramonte. His great-grandfather (Tatarabuelo) Ch Timberline Barni Drakyias, was best of breed at Westminster this year: 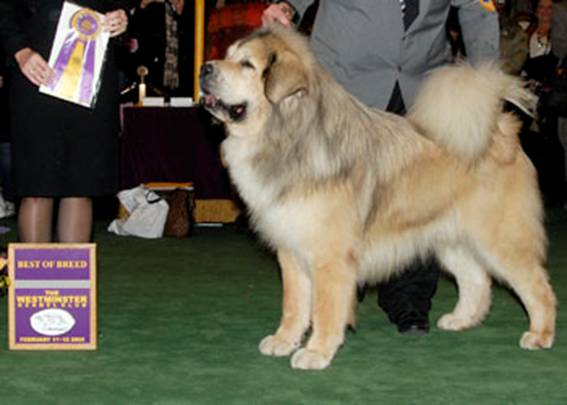 This breed can grow very big, up to 200 pounds. Agramonte, now only three months old, is quite an armful already. Tibetan Mastiffs are considered a primitive breed, coming into heat only once a year as is the case of many wild canids. They are known for their independent spirit and must be fully socialized, as they have strong territorial and protective tendencies, ingrained over many centuries as a result of their role as guardian of housholds and livestock. Their inner coat sheds once a year, growing back to provide dense insulation against the cold of winter. Agramonte is very happy playing in the snow.