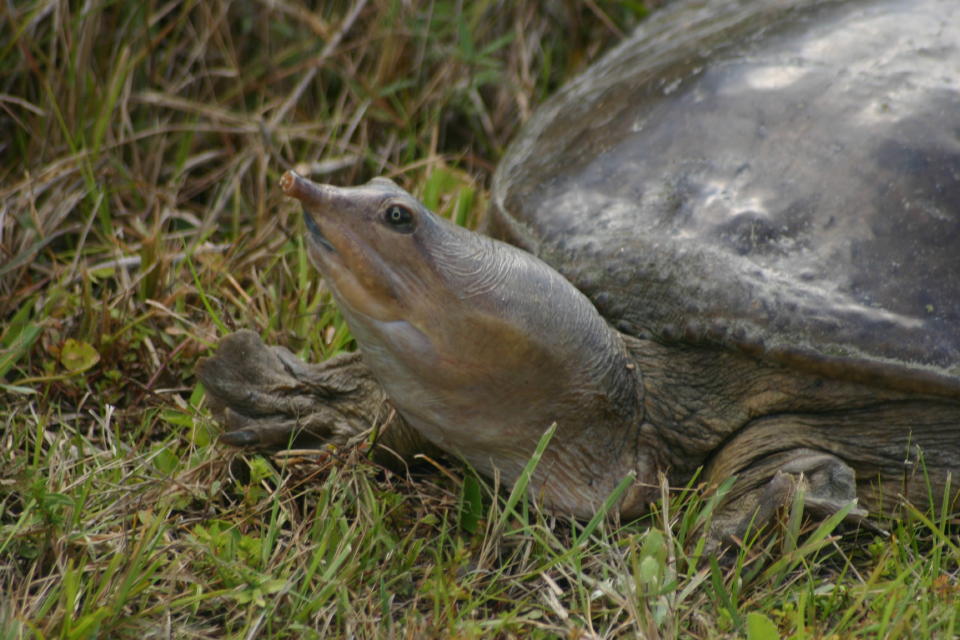 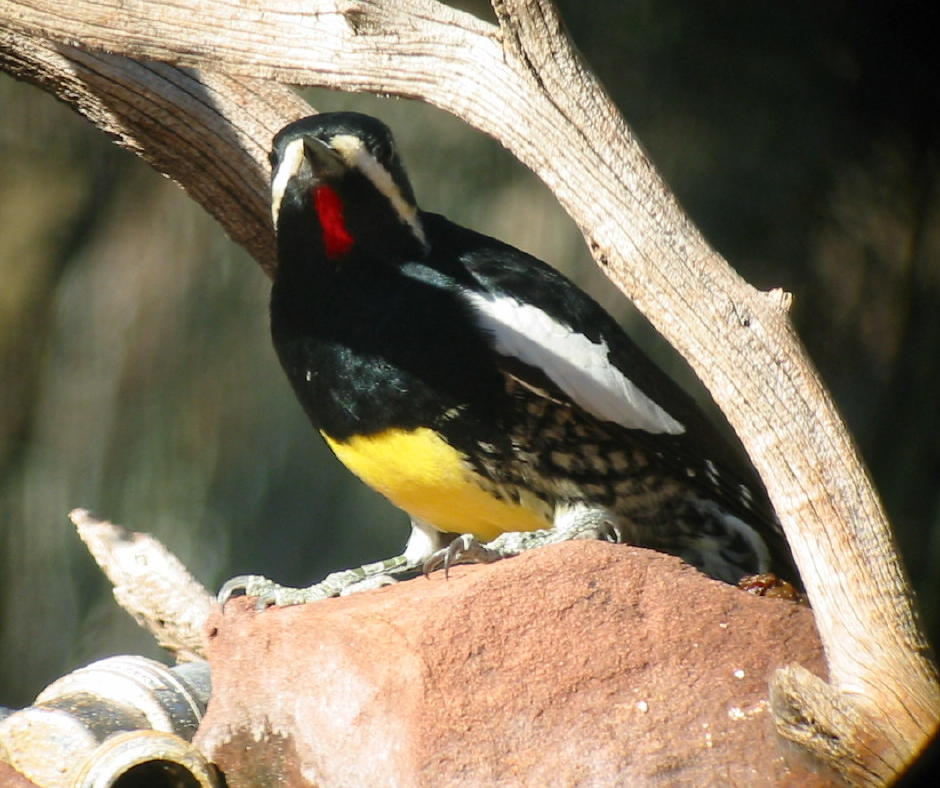 When I collected my New Mexico “Bathing Beauty” gallery I neglected to include a couple of special photos. These two, of the Williamson’s Sapsucker, bring out the stunning beauty of this little woodpecker. He usually visited the water so briefly and infrequently that he was gone before I could set up my cumbersome digiscope. One day he delayed his departure just long enough to provide me with a couple of views that show different aspects of his plumage. 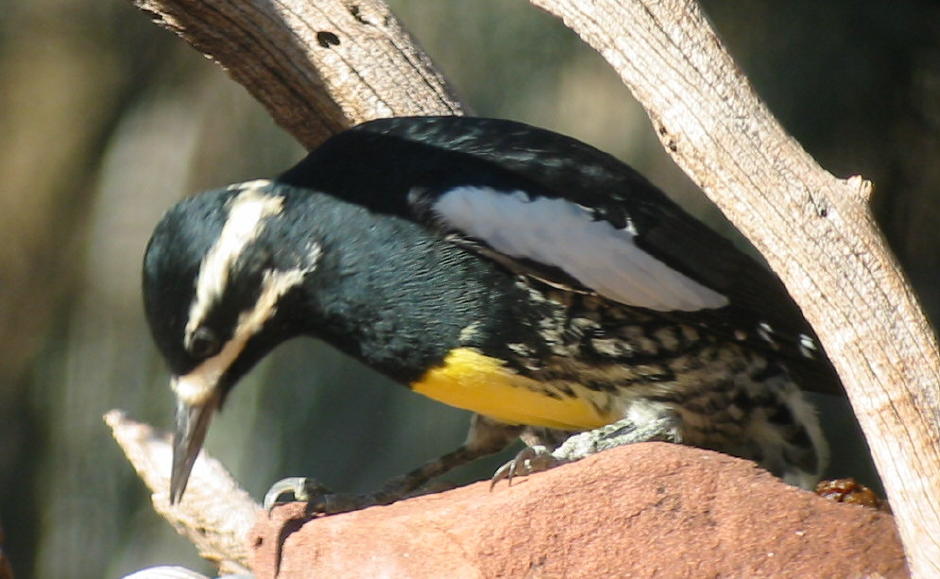 Here, a Northern (Red-shafted) Flicker pauses for a drink. 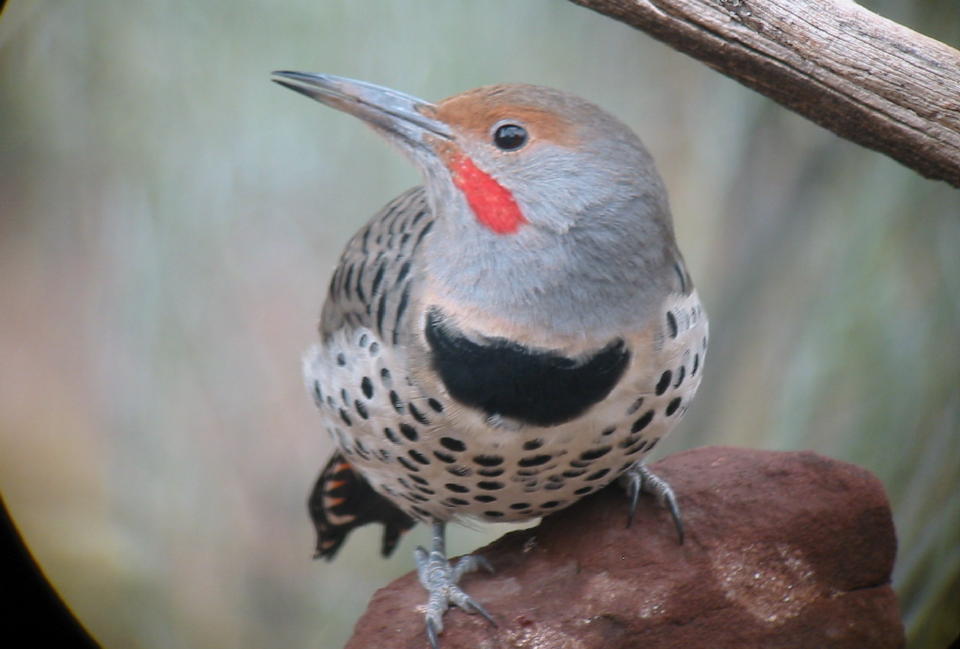 As a kid in New Jersey, all my flickers had black moustaches, so it was a treat to see red ones when I moved out West. And, of course, all my goldfinches had yellow backs during the summer. We had both American and Lesser Goldfinches in New Mexico, the former species visiting us during most winters. 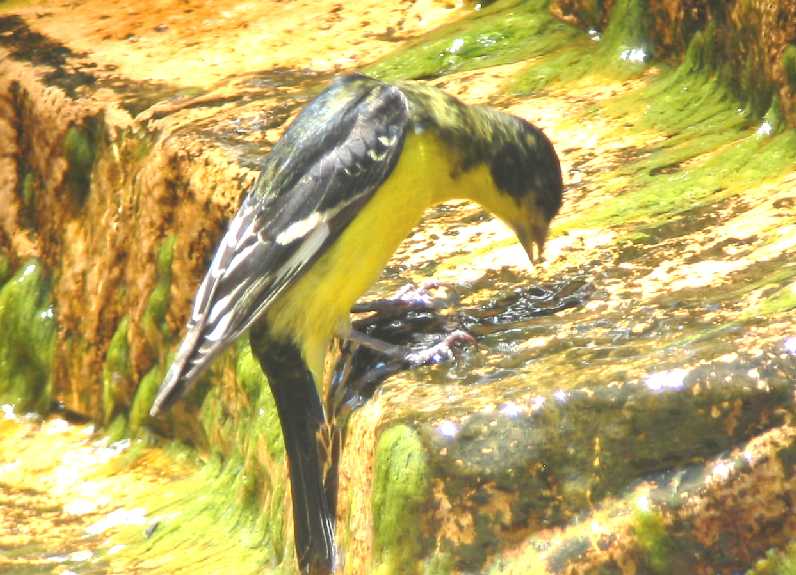 Like its eastern counterpart, the Lesser Goldfinch bred late in the summer and sometimes their hatchlings did not show up until early September.

For sake of comparison, here is one of the few American Goldfinches that showed breeding plumage before departing for northern latitudes. 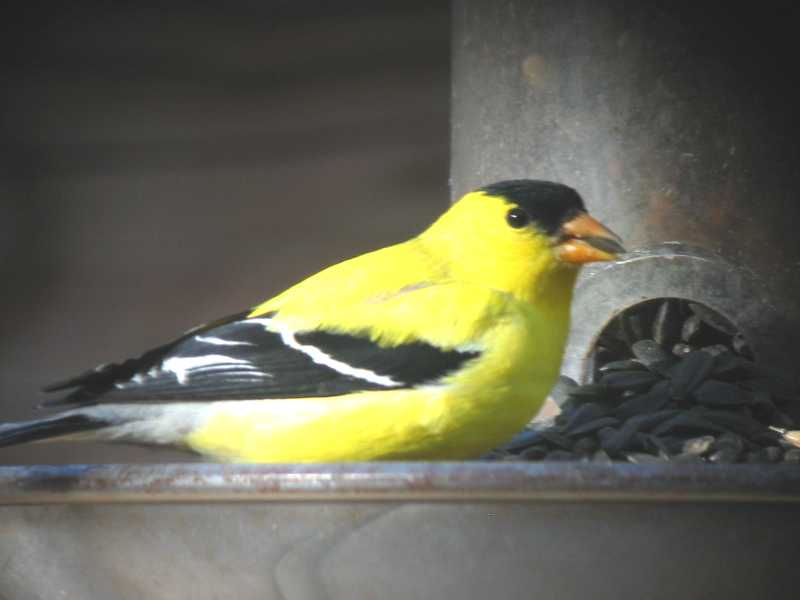 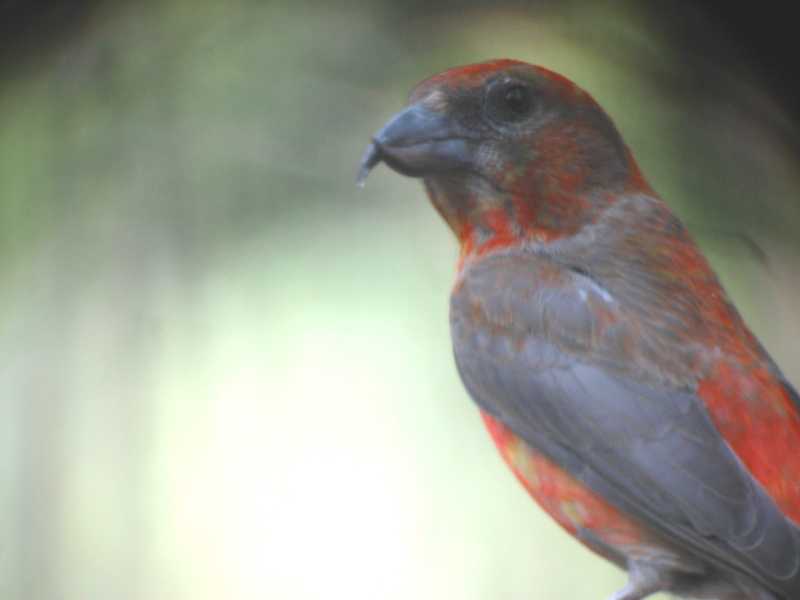 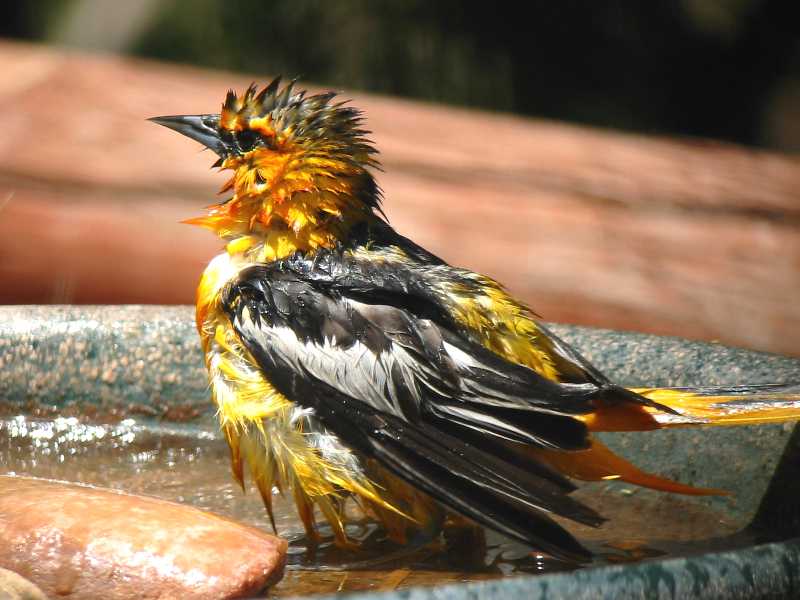 Laura (Somewhere in NJ) recently mentioned in her Blog that one bathing bird often attracts others. She inspired me to rummage through my photos of bathing birds. How I miss our ponds in the front and back of our New Mexico home! They were one of the few sources of drinking water at 7000 feet in the Sandia Mountains, so they provided me with many photo opportunities. However, most of the opportunities did not result in photos.

The above candid shot was not very flattering to this adult male Bullock’s Oriole.

These pictures were taken from inside our family room, through sometimes dusty windows, using a Kowa spotting scope and a small point-and-shoot Canon A40 camera. Click here to see my makeshift equipment. While the images lacked the detail that would have been possible with more megapixels and better lenses, they did serve to capture some private bathing moments. 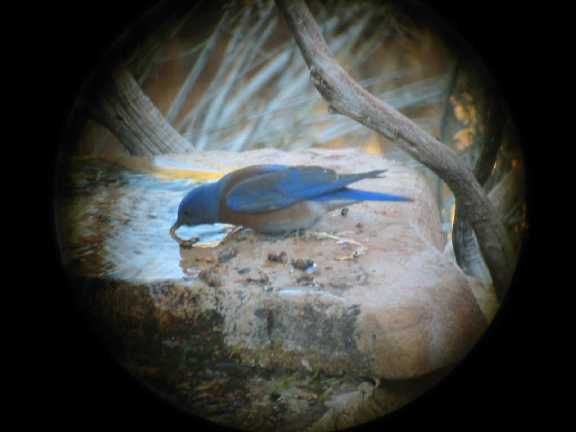 This image of a male Western Bluebird is technically very poor, what with the vignetting and the hazy focus, but it surprised me with its subtle beauty. If I had set out to achieve such an artful effect, I am sure I would have failed miserably.

Its mate also appears poorly exposed, but this picture of a female Western Bluebird is one of my favorites: 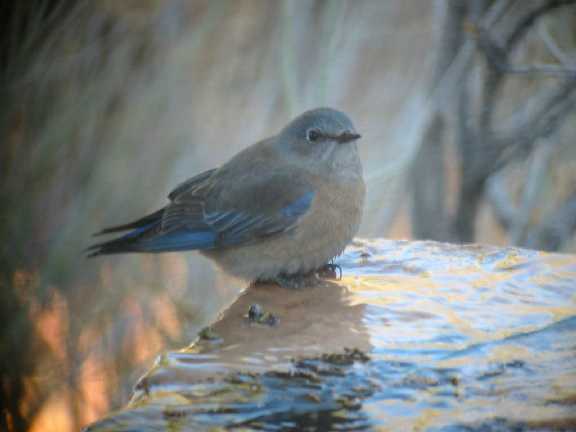 One day when I was running the garden hose to water a Ponderosa Pine seedling, a Townsend’s Warbler came right up to my feet to drink and bathe. Warblers, such as this Black-throated Gray, were particularly attracted to the water. 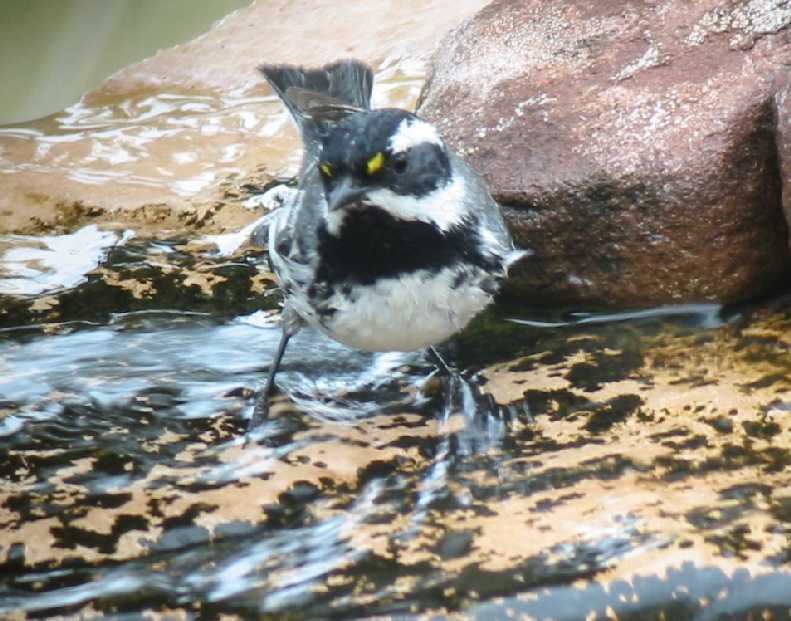 We had many visits from locally breeding Virginia’s Warblers, but their constant motion and the delay inherent in my little camera’s shutter action always made me miss a good pose. I did click at the right time to capture this male Wilson’s Warbler. 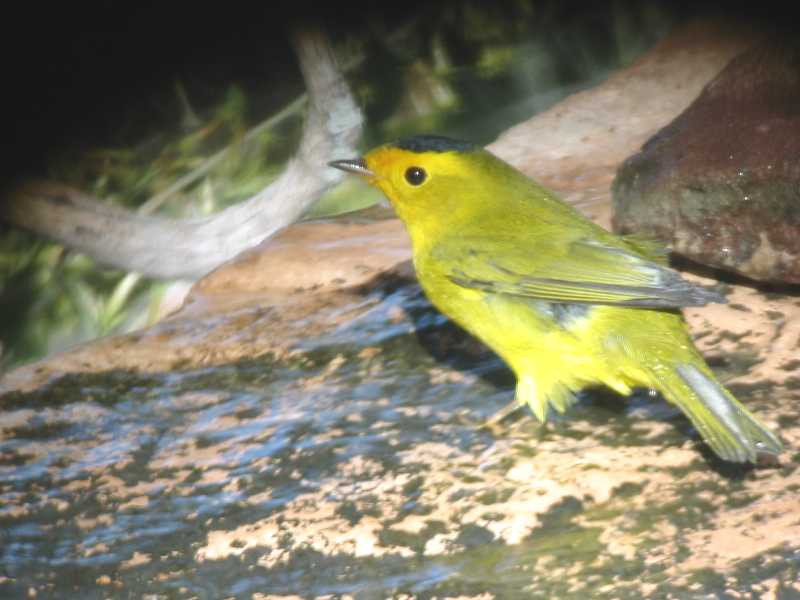 Finally, a blurry portrait of part of a family group of Bush-tits. 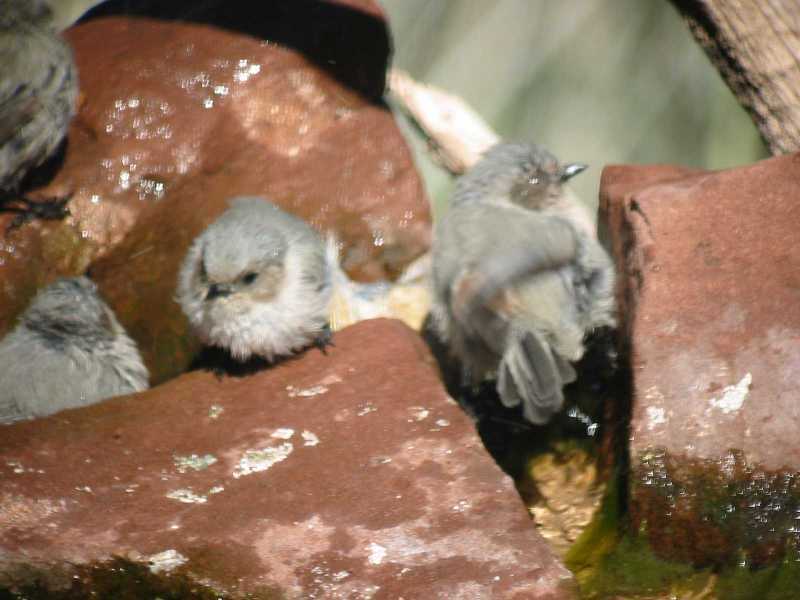