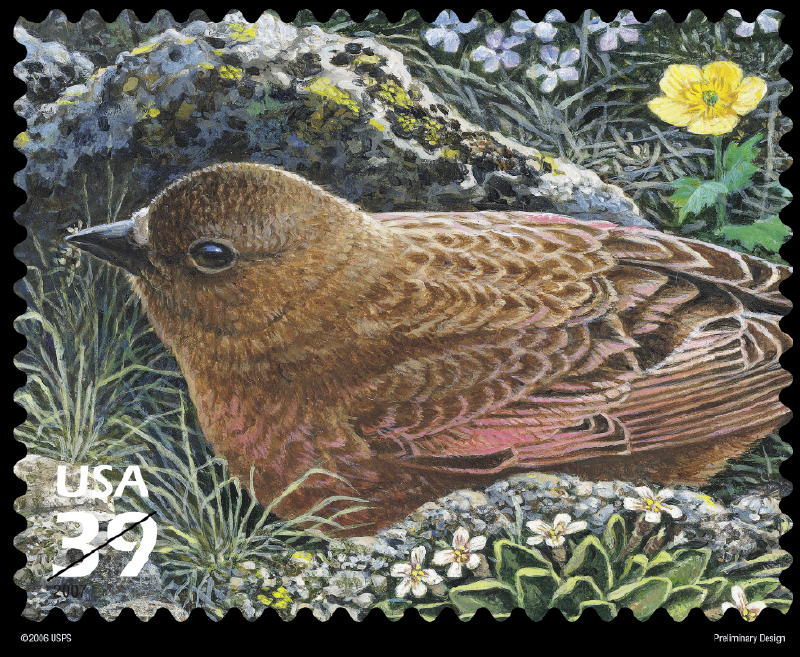 The Brown-capped Rosy-finch has been honored with its very own US postage stamp, but so far it has not turned out in numbers in New Mexico for the celebration.

Three species of rosy-finch visit the feeders at Sandia Crest, at 10,678 feet the highest point on the Sandia Mountains east of Albuquerque: Black, Brown-capped and Gray-crowned (including two distinguishable races of the latter species, the Interior and the Coastal, or Hepburnâs Gray-Crowned Rosy-finch). The birds usually arrive in early November and stay until late in March.

There are annual fluctuations in their numbers and species mix, according to sighting records entered by visitors every winter since 1999-2000, when seed was first spread in the parking lot of the Crest House Gift Shop and Restaurant. (For a description of the history of the rosy-finch feeding project, see this article in Birders World)

All three rosy-finch species usually have shown up at Sandia Crest in good numbers each winter since. An exception was the winter of 2003-04, when the Brown-capped species was nearly absent. This was unexpected, as the Brown-capped species nests relatively nearby, in the southern Rocky Mountains, and has even been found to nest in northern New Mexico. Scott Rashid, who bands rosy-finches in Estes Park, Colorado, noted no decrease in the Brown-capped species that winter. That same winter, Cassinâs Finches were also absent from the Sandia Mountains and North Central New Mexico for the first time, having been abundant the previous three years. Were these changes in the occurrence of two finch species somehow causally related?

Steve and Nancy Cox and other volunteers from Rio Grande Bird Research have conducted rosy-finch banding every winter since 2003-04. Last winter(2005-2006) the banding team set a new record. They newly banded a total of 298 rosy-finches: 44 Brown-capped, 221 Black, and 33 Gray-crowned, including 5 Hepburn’s race.

So far this winter (2006-07), the Brown-capped Rosy-finch has again been rare at Sandia Crest. Blacks have predominated, as is often the case in early winter, and until this past week there has been a sprinkling of Gray-crowned Rosy-finches. Interestingly, Cassinâs Finch has not appeared so far this winter, and this is quite unusual. Again, is this coincidental reduction in abundance of the two species somehow tied together? 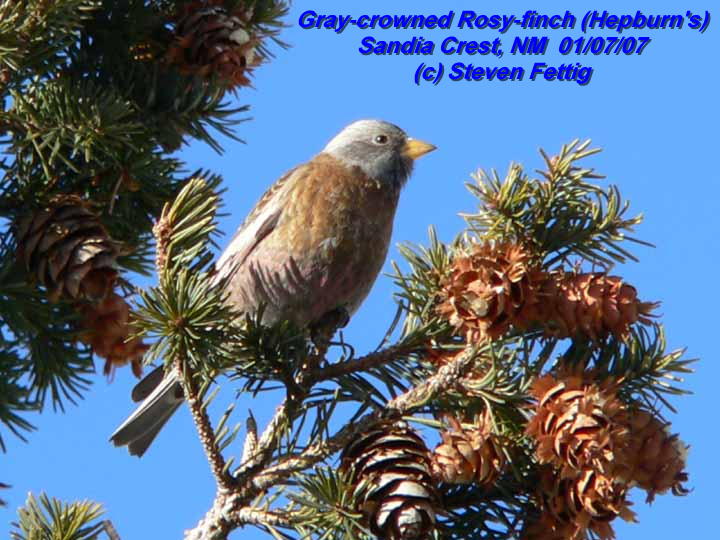 Of the two distinguishable races of Gray-crowned Rosy-finches recorded at the Crest, the Interior (brown-cheeked) usually greatly outnumbers the Coastal or Hepburnâs (gray-cheeked) forms. Most years it has been unusual to record more than one or two Hepburnâs on any given day.  (Photo: Hepburnâs race, by Steve Fettig)

Amazingly, this past Sunday the researchers newly banded 104 rosy-finches, the most they ever banded in one day. Of these, 38 were Gray-crowned Rosy-Finches. Twenty-six of these 38 were Hepburn’s raceâquite a contrast to the 5 Hepburnâs banded the entire previous winter. They also banded 65 Black Rosy-Finches and one Brown- capped. So far this winter, 241 rosy-finches (202 Blacks, 38 Gray-crowned, and one Brown-capped) have been newly banded, and 7 have been recaptured from previous seasons.

It will be interesting to see if the dearth of Brown-capped Rosy-finches as well as Cassinâs Finches persists into the remainder of this winter. There certainly is nothing similar about the amount of snow during the two winters during which both species were scarce to absent.  2003-04 was the first winter in its history that Sandia Ski Area failed to open for lack of snow. This winter has seen a succession of blizzards that have left drifts of up to seven feet on Sandia Crest.

Is it possible that the unusual storms in the Northwest breeding grounds of the Hepburnâs race, or the El NiÃ±o wind patterns, may have been a factor in their unprecedented invasion?