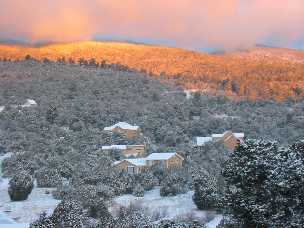 Our home in New Mexico had a wonderful view of the east face of the Sandia Mountains. In the morning, as shown in this scrolling panorama, we watched from the huge windows in our front-facing Great Room as the sunlight slowly crept downward from the highest peaks. As sunrise progressed, the wavelengths of light changed unpredictably. Sometimes the top of the mountain was bathed in gold or crimson. In winter, we watched snow squalls dance after each other across a majestic backdrop of evergreens and limestone outcroppings.

Days were short, as our home was wedged in between two ridges that blocked the sun at both ends of the day. Night fell indeed, almost with a thud as we went from light to dark when the sun dipped under our mountaintop.

We had outgrown our tri-level house. Creaking joints and aching backs made snow removal less pleasurable. Grocery shopping required us to drive anywhere from five to 15 miles. We decided to relocate to a smaller home, either in Southwestern Arizona or in Florida, disparate but balmier destinations.

Staring at a distant point relaxes the eyes. It also confers an overall sense of relaxation. One caveat: our new home had to provide us with a vista, be it mountain or cityscape. We did not want to be trapped in two dimensions. Of course, we also wanted to be within walking distance of shops and continue to enjoy the security of a gated community as we had in New Mexico.

We found our new home on a small lake in South Florida. A supermarket was within easy walking distance. Family was nearby, for a few months, until our daughter and her family relocated to Illinois upon her husband’s promotion.

At least once a week, Mary Lou and I led bird hikes and provided interpretation at the rosy-finch feeders on Sandia Crest, at 10,678 feet elevation. We always walked at a leisurely pace, as it was easy to get out of breath. Walking through deep snow was particularly difficult. One morning, after a two foot snowfall, I tried to walk, without snowshoes, to replenish the feeders. At one point I broke through the crust that covered a drift from an earlier snowfall, and sunk down to about 7 feet. I wasted quite a bit of effort, trying to climb up, and had to stop to catch my breath. Then I discovered it was easier to crawl or âswimâ up to the surface.  (Pictured: The view from Sandia Crest. Click here for a winter panorama that will scroll in your browser.)

At this altitude, each breath of air delivers one third less oxygen than at sea level. We always recommend that visitors acclimatize

by spending at least one night at 5000 to 7000 feet, and making several short trips rather than venturing up for a long period of time. Vigorous exercise and dehydration also accentuate the effects of oxygen depletion. Several visitors who flew in from near sea level and proceeded directly from the airport became acutely ill, with headaches, dizziness and nausea. This photo shows the Sandia Crest House covered to the eaves after a blizzard.

We learned the effects of high elevation on our first venture into mountain heights, when we drove to Estes Park, Colorado for a medical meeting and stayed at 8,500 feet. As I was falling asleep the first night, I had sudden air hunger that lasted for a few seconds, and the sensation recurred again later that night, briefly waking me.

On a business trip from Dallas to Baltimore, I had an interesting experience. About 20 minutes out of DFW, there was a disturbance in the rear of the plane– I heard someone moaning and flight attendants began scurrying about. Then, over the intercom there came a request for any physician passenger, to assist in a medical emergency. I responded. It turned out that one of the passengers recently had eye surgery that required a bubble that helped hold the retina in place (he had to lie on his face for three days). His doctor then cleared him for travel to Johns Hopkins for additional specialty care. However, all the air had not disappeared, and under the reduced cabin pressure it expanded and caused extreme pain and reflex signs of shock.

Not knowing how the pressure system worked, I asked that the cabin pressure be “turned up.” I was told that it was maintained at 7000 feet and that the only way to increase it was to go to a lower altitude. The pilot began a descent to Little Rock while I talked to the man’s doctor in Dallas. At some point as we descended, the pain diminished and nearly disappeared, and the patient’s vital signs stabilized. We then decided it was safe to proceed to Baltimore at this reduced altitude. It took quite a bit longer, as the plane could not fly as fast. I don’t know how high we were, but I could see cars on the road and cattle in the fields all the

way to Baltimore, where we were cleared as an “emergency” landing, meaning we had a direct approach and an ambulance waiting.

One nice side effect was that American Airlines gave me a bottle of champagne and a free round-trip voucher!