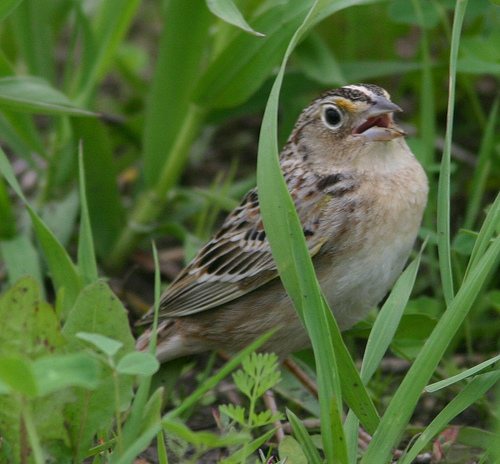 Mary Lou only started birding in 1999, and yesterday she recorded her 500th bird species in North America. As I mentioned in an earlier entry (Looking for the Elegant Trogon), at the time Mary Lou started listing her bird sightings, I had been birding for over 50 years and had already recorded  474 species in the Lower 48, Alaska and Canada. It took her less than seven years to  pass that number. In the meantime I had added only 98 new species, to reach my present life total of 572 of the possible 939 birds known to occur within that geographic area.

We both enter our sightings into spreadsheets, and also keep track of  additional birds we have seen in our travels to Hawaii, the and . Her landmark #500  caused me to take a harder look at my own entries. Birding is a game with an element of competition, and in  order to make comparisons between lists one must agree to certain ground rules. This is almost impossible for the two of us. Let me give a few examples.

Out on , , we sighted a beautiful male Scarlet Tanager. It was partially hidden as it moved about in some thick foliage. Since I grew up in , this was one of the first birds that made my  list, a long time ago. Yet, living in the mountains of , I certainly missed seeing many of the East  Coast specialties, so the tanager was a welcome sight, and I was thrilled when Mary Lou got to see her first one, during her first year of birding. That night we compared notes and she refused to âcountâ the Scarlet Tanager!

âWhy?â I asked.  Because she never got a good look at its tail
and honestly could not say whether it was red or black. I showed her the picture: âItâs black!!!â Not good enough for her. Come to think of it, I honestly cannot say whether I actually saw that particular birdâs tail, but NOTHING ELSE even comes close to looking like an adult male Scarlet Tanager (at least in ). Thankfully, we saw another the next day and this time Mary Lou was quite satisfied that she had seen his tail.

My scruples over such a fine point of identification vanished many years ago. At first I did not count female warblers if they differed markedly from males. This gave me an incentive to find a few males such as American  Redstart, Black-throated Blue and Blackburnian Warblers. Sad to say (or, am I relieved to say?), Mary Louâs  ethics are also deteriorating. My bad influence, and the practicalities of birding tours, have overwhelmed her.

For example, Mary Lou set out to only count birds she could identify on her own. This is fine when we walk our âpatchâ and have all the time in the world. But try that on a high powered birding expedition, surrounded by experts of all stripes: gull men, pelagic ladies, âpeepâ specialists, hawk watchers, and (worst of all) sparrow spotters. By and large, tour leaders are very patient and go out of their way to be sure that everyone in the party has seen every bird. Inevitably, the âgroup listâ (meaning birds seen by some arbitrary small number greater than one or two) is bigger than everyone elseâs. And this is how it must be, as the Pomarine Jaeger sails out of scope range over the whitecaps, or the Winter Wren ducks for cover just as the binoculars go up.

Both of us âsawâ and âcountedâ that single Yellow Rail as it fluttered up into the glare of flashlights and, in a split second, sunk into the reeds of the Manitoba Marsh. True, we had heard its calls and stalked it for many minutes, slogging in our NEOS overshoes through shin-deep muck. There was really no question as to its identity, a pale reflection against the night sky. The next morning, our leader coaxed a curious LeConteâs Sparrow out of the grass in response to its recorded call. Perhaps realizing it had been duped, the bird did not tarry long enough for us to savor its rich colors. Quick! Tick it off, and then rush to see the Chestnut-collared Longspur and the Spragueâs Pipit in the next field.

Under the “rules of the game” as set out by the American Birding Association, it was OK for us to count the Yellow Rail solely on the basis of its distinctive call. [For a first encounter with a species, no matter which list is involved, identification may be by sight or sound. The sighting or sounding may be brief, but in combination, field marks seen or heard must be sufficiently distinctive to distinguish the bird from all other species].

Yet, that experience so differed from the time when, as a kid, I saw a ghostly Barn Owl fly under the outfield lights during a Brooklyn Dodgersâ night game at Ebbetâs Field. By habitat, head-heavy shape and pale color, that owl could have been nothing else that exists on this planet. For me, it was not good enough to “count.” Years later, after many near misses, I caught an unsatisfactory glimpse of the same pale creature at in as it flew directly away from us from one cottonwood tree to another. Still unhappy with the quality of my view of the bird, I held out until I finally saw a âcountableâ monkey-face looking me in the eye. I have to admit that the latter sighting was so much more satisfying, and so licit!

Sure, I have seen Grasshopper Sparrows before, little flat-headed, short-tailed waifs singing weakly and quickly dropping for cover or running mouse-like through the grass. Never have I seen such a beautiful sparrow as Mary Louâs #500. The field guides do not do justice to this one. My image (above, added in 2008) does not approach the beauty of the one we saw on our favorite patch of Everglades a short walk from our home. Unlike the drab non-migratory race that inhabits , this Grasshopper Sparrow was a richly-adorned visitor from the north. Uncharacteristically, it posed for us for many minutes as we took in all the details of its plumage. Yes, âbird chasingâ can be fun, but this was âbird watchingâ at its best.

Read: “Finally! I Am Married to a Birdwatcher!

One Response to “500 Bird Milestone”