“Of all living things, birds have most ensconced themselves in our minds as being representative of all that is good about nature.”  (George Fenwick, founder of the American Bird Conservancy, in Birding: July 2010)
Birders have an undeserved reputation as eccentrics. At least, I think it is undeserved, for I share their passion, and (of course) I am very mainline and normal! There are sports nuts, compulsive stamp and beer bottle collectors, golf and bridge addicts, and yet it seems that âold ladies in tennis shoesâ who happen to sport a pair of binoculars and who get up early to look into treetops, oblivious to curious stares, suffer public deprecation. Certainly, that was Mary Louâs view. The last thing she would think of doing was to go out and actually look for birds.

As a kid, I often thought how I would like to marry a girl who loved birds. As the hormones raged and the demands of college and medical school intervened, my birding activities dropped off sharply. I had turned into a covert, âunderground birder.â My criteria for an eligible wife also changed. Of course, my Mom knew. She almost gave away my secret when Mary Lou and I left on our honeymoon. âWait until you see what Ken has in his suitcase,â she said. Of course, Mary Lou had no clue and felt quite anxious that it might be chains and a whip! She was most relieved to find binoculars and a bird book!

Ironically, Mary Lou would yet become an avid birder, but only after raising four children. Our youngest child Glen, born in 1967, had severe encephalopathy, a reaction to a measles vaccination at 18 months of age. He lost the ability to walk and talk, and became totally dependent. Mary Lou stayed home and cared for Glen his entire life, until he died at 24 years of age. I retired soon after his death, and we moved into the mountains of New Mexico. Mary Louâs widowed mother had become increasingly dependent, and she lived with us for several years. Glen died on her 89th birthday (she was born the same day as Bob Hope), and her condition deteriorated. After we moved to New Mexico she finally had to be admitted to a nursing home in Albuquerque, where she died at age of 94 on the day before Valentines Day, exactly 15 years ago.

During the almost 30 years devoted to the care of our son and her mother, Mary Lou had been pretty much home-bound. Only one of us would be able to attend family events such as graduations, weddings and funerals. Released from the burden of caregiver, Mary Lou was finally able to travel. 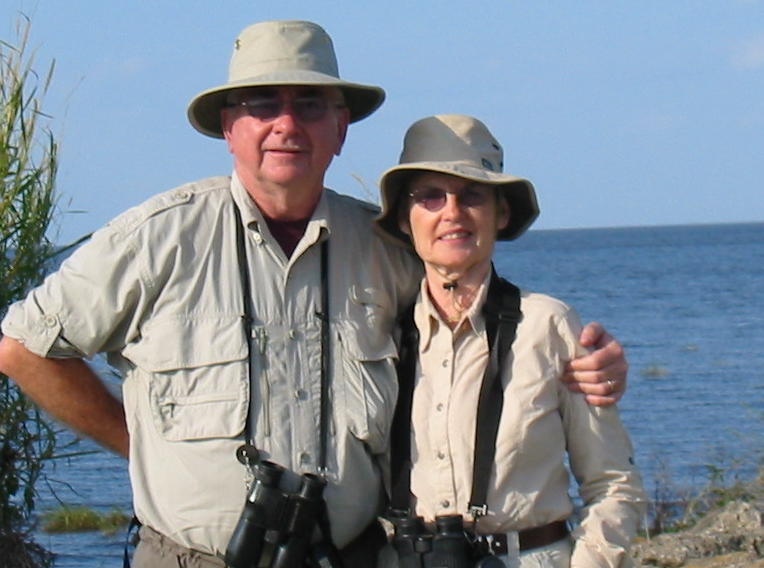 She always did appreciate the wonders of nature. We both loved hiking and exploring the Great Outdoors when possible, but she seemed to take a more expansive and spiritual view of Godâs creation while I was staring at the Brown Creeper making its way up a tree trunk, trying to see what it was finding to eat.

Once retirement and release from the burdens of care-giving presented us with more leisure and the opportunity to travel, we decided to try out the Elderhostel program (now known as Roads Scholars). We did not know what to expect, but our first Elderhostel, in the fall of 1996 on North Carolinaâs Outer Banks, was entirely enjoyable. We followed with outdoors oriented Elderhostels on Catalina Island, Yellowstone, the Navajo Reservation, and St. Maryâs, Georgia. The latter included canoeing in Okeefenokee  Swamp, which provided marvelous close up wildlife viewing.

In the spring of 1999, the notice of a Birding Elderhostel in Southeastern Arizona caught my attention. I gingerly asked Mary Lou whether she might want to go on it. Her reaction was predictable. All our previous Elderhostels had not only introduced us to interesting places, but also many fine fellow student-travelers whose company we really enjoyed. Why should we go out before dawn looking for birds with a bunch of âweirdoâ bird watchers?

She relented, but only on condition that she could study my field guide and see if there were any birds she might enjoy viewing. As if she could just pick and choose! I happily tutored her and provided lists of the most likely sightings. She settled on only one bird that she just really wanted to see: the Elegant Trogon. I certainly agreed with her on that, as I had never seen one myself.

Photo of Elegant Trogon (c) George West, Birchside Studios  (I was not into photography back then, and this beautiful photo is reproduced with Dr. West’s permission):

On our way to our first Birding Elderhostel, we drove out to Arizona from our home in New Mexico, staying one night in Silver City. Mary Lou seemed single-minded in her quest for the beautiful but uncommon Elegant Trogon. The next morning we stopped by Portal, Arizona and visited Cave Creek Canyon, where the Elegant Trogon had been sighted a few days before. We encountered birders who had seen it earlier that day, but we did not succeed in locating one.

The Elderhostel began on a Sunday afternoon and finished up with breakfast on Saturday, May 8, 1999.  We saw many interesting and new birds, but we kept missing the Trogon. One day, on the grounds of Fort Huachuca, our leaders split the group so some could go on a more strenuous hike into Scheelite Canyon. We joined the mountain climbers while the couch potatoes stayed back and walked Garden Canyon. We got to see our first Red-faced Warblers and Spotted Owls, but a couple of the âlazy folksâ saw the Elegant Trogon down below!

We spent the next day, Friday, May 7, 1999, away from the trogon haunts and held little hope of ever seeing one. We did meet a visiting German birder, who mentioned he had seen the Elegant Trogon at sunup that very morning in Garden Canyon! Since we had a schedule to keep, and planned to drive home right after breakfast the next morning, my hopes of seeing a new “lifer” were dashed. I assumed Mary Lou did not care that much about missing her âtrophyâ bird after all.

A couple of other diners, who had also missed seeing the trogon,  heard Mary Louâs surprising statement, and said they wanted to join us. Mary Lou sternly told them that they had to be ready to leave for Garden Canyon at 4:30 AM, or we would go without them. Sure enough, we all gathered and I drove to the Fort. Just as advertised, we not only saw the beautiful male Elegant Trogon, but a female as well, and watched as she repeatedly entered and exited a prospective nesting hole.

When we got home, Mary Lou started logging her bird sightings, and has not looked back since. On her âElegant Trogon Dayâ I had already accumulated sightings of 474 species over 51 years of birding in the lower 48 states. Within less than 5 months, Mary Lou recorded her 100th species, a Fox Sparrow, during a birding Elderhostel in Oregon. In the meantime, I had seen only 3 ânewâ birds! The next year, after birding only for 12 months, she bagged a Long-tailed Jaeger in Denali National Park, Alaska (thanks to all the new birds we saw in Alaska, my list had grown to 527 by then).

On October 13, 2000 she hit 300 species with a Ferriginous Hawk in New Mexico, and with a Green Parrot in the Lower Rio Grande Valley of Texas in April, 2002  she reached the 400 species milestone. We moved to South Florida in 2004, which provided  a treasure trove of new birds, and in 2007, a Grasshopper Sparrow brought her North America ABA total to the coveted 500 markâMary Lou now has 507 species to my 576.

Having a new birdwatcher in the family has been a real bonus for me. No more sneaking out and apologizing for coming home late when the birding was particularly good. Best of all, as Mary Lou ticked off each new life bird, I shared with her the same sense of discovery. Some of her first birds seem bigger than life. (Disclaimer– my photography hobby started much later, so these are recent images.)

Even my old brain remembers her first meadowlark, almost as vividly as if it were hanging on the wall: Scrupulously, Mary Lou refused to “count” her first Scarlet Tanager because she could not see the color of its tail: 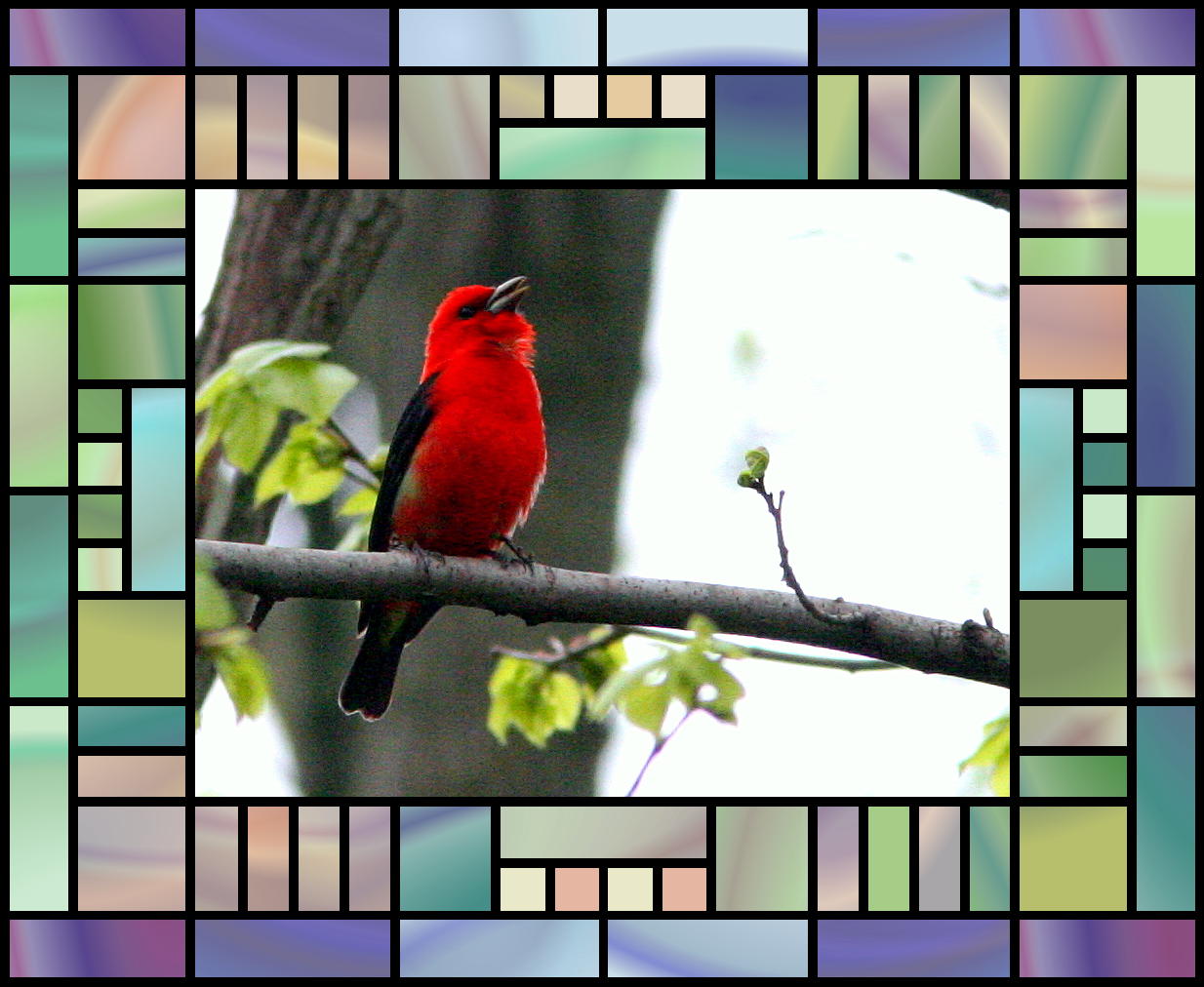 And of course, Mary Lou’s favorite Florida bird is… 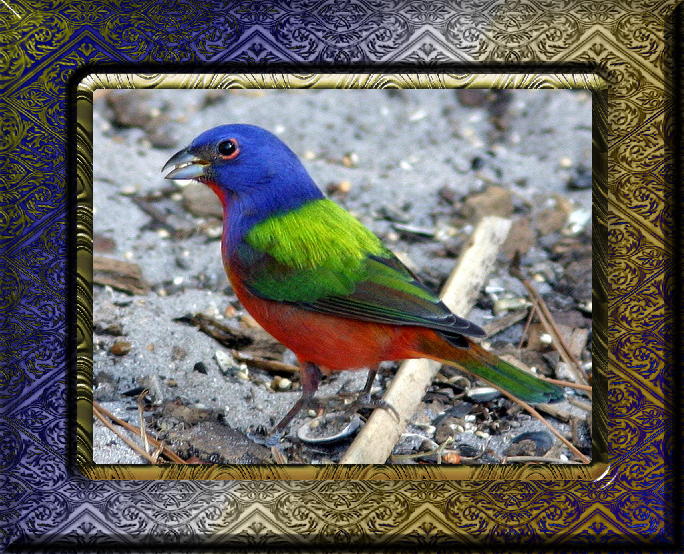 During a birding Elderhostel in New Jersey, Mary Lou spotted a male Hooded Warbler, her first, or so she thought. I reminded her that one had appeared in our backyard pond in New Mexico several years earlier, and that it was she who sighted it and excitedly brought it to my attention. âOh,â she said, âI do remember seeing a pretty bird, but I donât remember what it looked like.â  As birders we develop âprey imagesâ that, with experience, become quite specific, akin to the manner in which we recognize a friend or relative. Asked to draw or even describe that familiar face in detail, we fall short, yet we are certain in our identification. The art of observing and identifying is built upon repetition of the basic skills of looking and finding.

To my dearest Mary Lou, best friend, lover and fellow birder (courtesy of our local pair of Bald Eagles who so nicely assumed this pose for us): P.S. Sorry I was too cheap to run over to Wal-Mart for a card

11 Responses to “A Valentine for my favorite birdwatcher”