Not too many people can say they closed down the Grand Canyon. Well, just a piece of it, but I am getting ahead of myself here. This adventure started in 1969 during my rotation with the Indian Health Service as part of my Tulane University School of Public Health Preventive Medicine residency training. My six week assignment with the Phoenix Area Indian Health Office was to include an orientation visit to Supai Village in the Havasupai Reservation. The reservation is located 2,400 feet below the South Rim of the Grand Canyon. Only about 300 people inhabited the reservation, the most isolated in the United States, accessible only by helicopter or on foot or pack animal down a trail carved out of the sheer canyon walls. It was said to be the only place in the USA where mail was still delivered by mule.

Henry Keneally, the Health Educator from the Area Office accompanied me. After an overnight stay in a little motel west of Flagstaff, we arose very early to drive about two hours westward on Route 66 past Peach Springs. We then turned to the north on a dirt road for another 66 miles to Hualapai Hilltop (view from Hilltop pictured), our staging area. There was nothing much there except for a corral with horses and mules.

An Indian guide greeted us, and as we saddled up I cast an anxious glance at the edge of the canyon that gaped before us. Havasupai means âpeople of the blue-green water,â but there was no water and nothing green in sight. I learned that the name derived from the color of the water in the stream that passes through Supai Village. The water is high in minerals and is populated by blue-green algae that impart the distinctive color after it is aerated by tumbling over many little falls.

The guide helped me on the mule, the first I had ever ridden. A mule sways as it walks, making you feel like you are riding in a rocking chair. As we approached the edge of the cliff I thought we might be planning to fly down, but the trail suddenly appeared and we moved slowly through switchbacks and one hairpin turn after another. The mule had a disturbing tendency to walk on the very outer edge of the trail, sometimes less than a foot from a 500 foot plunge. I found myself leaning away from the ledge, but the guide cautioned that this only made the mule move farther out. After about a mile of white-knuckle descent, the trail began to level out, and then we entered the head of Cataract Canyon, about six miles from the Village. 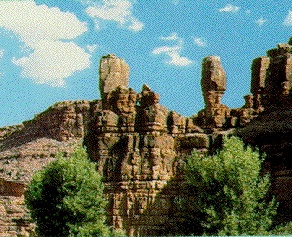 Greenery appeared, and as we progressed down the canyon we began to see moisture underfoot. Then we heard the gurgle of water as it erupted from several springs along the way. In no time the creek had become a spectacular rushing torrent. The arroyo widened into Supai Canyon, and eventually we could see the buildings and animals on the flat and green canyon floor. To the sides, the canyon walls were adorned with grotesque statue-like formations, the Wigleeva Rocks (photo). Finally we arrived at the clinic. The physician who usually conducted the regular Tuesday medical visit had the week off, and one of my duties was to cover for him. The next few days turned out to be very eventful.

Next Installment: Vacating the Grand Canyon