In a little over two months, the three Rosy-finch species will return for the winter to Sandia Crest, just east of Albuquerque, New Mexico. Start planning your trip, which might coincide with attending the 2008 Festival of the Cranes at Bosque del Apache NWR scheduled for November 18-23

The full daily schedule of 2008 Festival of the Cranes events (workshops, tours, hikes, exhibits and lectures, dinner, keynote address) may be found at the new Friends of the Bosque Web site. There will even be two tours of the Trinity Site, where the first atomic bomb was detonated. 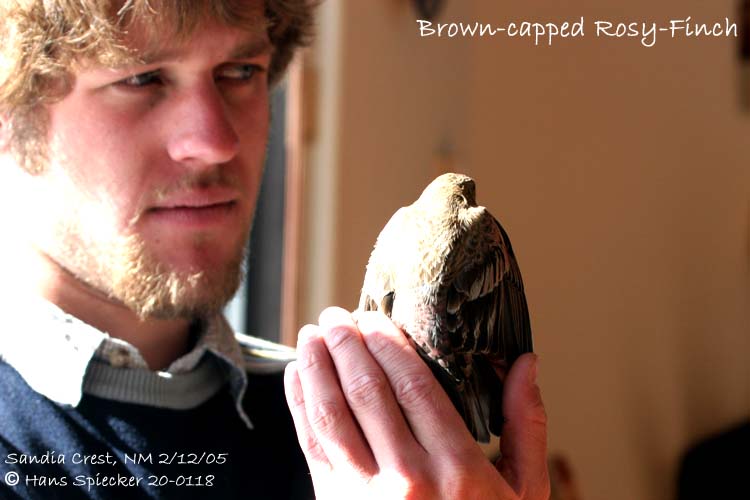 This week marks the third anniversary of the death of Ryan Beaulieu, the young New Mexico birder and rosy-finch researcher. His family and friends have established a scholarship in his honor, administered by the Central New Mexico Audubon Society.

For more information about the Ryan Beaulieu Memorial Youth Scholarship, visit this link.

High Fives to an “Awesome” Birder

Cole captured this dramatic photo of rosy-finches mobbing a Red-tailed Hawk at Sandia Crest (click on the photo for a full-screen wide view of the action): 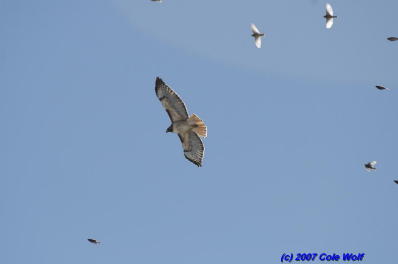 The following is Cole’s report on his experience at the Maine Audubon Youth Birding Camp:

I was fortunate enough to be the recipient of the 2008 Ryan Beaulieu Memorial Youth Scholarship; I used the scholarship to attend Maine Audubonâs Youth Birding Camp on Hog Island, ME.

Hog Island is a private sanctuary owned by Maine Audubon located off the stateâs southern coast. I spent five nights on the island with eleven other teens interested in birds and nature.  On the morning bird walks around the island we heard dozens of Black-throated Green Warblers and Northern Parulas along with the occasional Blackburnian Warbler. White-throated Sparrows were also common. Common Loons, Black Guillemots, and groups of Common Eiders were often seen from shore. Unfortunately our group missed the Ruffed Grouse that wandered into camp one morning. On the final morning our leaders set up mist nets; we banded a Carolina Wren and several Purple Finches. Besides birds we also saw a Porcupine and several Garter Snakes on the island.

Although we stayed on Hog Island, during the day we usually went birding elsewhere. Several times we spent mornings on the mainland looking for warblers and other woodland birds. I saw fifteen species of wood-warblers during the camp, including Canada, Magnolia, Chestnut-sided, and Pine. Besides the many warblers we saw Red-shouldered Hawk, Yellow-bellied Sapsucker, Eastern Wood-Pewee, Blue-headed Vireo, and Baltimore Oriole. We also spent time in marshy habitats and had birds like Black Duck, Alder Flycatcher, Swamp Sparrow, and Bobolink. One of the most memorable experiences of the trip was having lunch overlooking a Bobolink colony. There were at least four pairs in the fields around us and the males sang and displayed almost constantly.

Of course we also visited Maineâs most famous birding locations: Eastern Egg Rock and Acadia National Park. Eastern Egg Rock is one of the sites where Atlantic Puffins have been reintroduced to Maine. Although it was a foggy day, we still managed to see dozens of Puffins and Guillemots. We also saw four species of terns: Common, Arctic, Roseate, and Black. Though Black Terns are common in New Mexico, the species is endangered in Maine and had never before been recorded at Eastern Egg Rock.  On the trip back we got close-up looks at all three species of Scoters.

We spent a full day at Acadia National Park. Besides spectacular scenery, highlights included the only Northern Gannet of the trip, a family of Peregrine Falcons, several Least Flycatchers, and a singing Veery.

I would like to thank the Ryan Beaulieu Memorial Fund for paying to send me to Hog Island. I would also like to thank CNMASâs Education and Scholarships committee for selecting me to receive the scholarship. It was a very memorable experience and I saw lots of great birds. I encourage you to donate to the Ryan Fund; it makes experiences like mine possible.