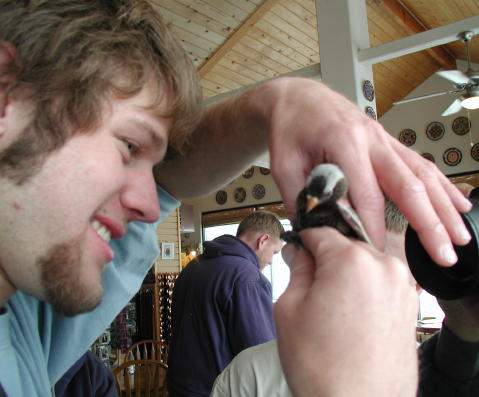 With a few other volunteers at the Rio Grande Nature Center State Park in Albuquerque, I led weekly Saturday morning bird walks. Their popularity and the enthusiasm of other volunteers soon allowed the walks to be expanded to both Saturday and Sunday mornings. Mary Lou started accompanying me even before she took up the study of birds.

Participants ranged from seasoned birders to neophytes who were visiting Albuquerque for a convention or the Balloon Festival and were looking for a little diversion. They were of all ages, but one kid stood out. At first I did not even know Ryanâs last name, but I grew to respect his skills in finding and identifying birds.

Ryanâs mother would drop him off and he often spent most of the morning at the Nature Center, birding on his own or offering help to visitors who asked questions about the birds at the feeders and water features. He also helped the researchers who trapped and banded birds during migration seasons.

Ryanâs favorite word seemed to be âAwesome!â The exclamation was not restricted to rare or unusual birds. It could be elicited by a good view of the most common species. His enthusiasm energized the other participants on the walk, making the experience all the more enjoyable and meaningful. We were always so pleased when he joined our walks, and so impressed by his knowledge and powers of observation.

I remember when Ryan first got his drivers license he called me late one evening to go owling in the Sandia Mountains near our home.  I was already in my pajamas, but could not refuse him.  He and his younger friend Raymond met me on the Sandia Crest Road and we went on to have a wonderful evening that included their getting great videos of a Northern Saw-whet Owl at Tree Spring Picnic Area. Ryan called the bird in, and he and Raymond crept towards it, bracketing it with their flashlights.  Only after the owl finally departed was the silence of the night pierced by their whooping and hollering and high-fives at a new “lifer” for Raymond. âAwesome,â indeed!

Soon after Mary Lou and I obtained the cooperation of the US Forest Service to start feeding the rosy-finches at the Crest House Gift Shop and Restaurant atop Sandia Crest, Ryan came up with his own plan for a research project to study these elusive and (formerly) rare visitors to the mountains east of Albuquerque. Ryan provided boundless energy to the Sandia Crest rosy-finch project and developed a five year plan for a banding program.  I foresaw his role in some day hosting a  rosy-finch festival that would attract researchers and birders from all over to share their knowledge of these species.

In August of last year I received an e-mail with the subject: âDreadful news.â Before even reading the message I knew its meaning. At my age when I see a subject line such as this I expect the news to be about someone in my age group. Not this time. Ryan had been killed in an automobile accident.

On the first anniversay of Ryan’s death, a memorial sculpture was dedicated to his memory and placed next to the rosy-finch feeder on the deck of the Sandia Crest House. Ryan’s mother provided me with excerpts from his journals and other  readings from the memorial gathering. The best way that Mary Lou and I could express our sense of loss was to compose a Web page in his memory. Visit Ryan Beaulieu’s Memorial Page and  View more Blog Posts about Ryan here.

To honor him, the Central New Mexico Audubon Society set up a scholarship fund to support other young birders who wish to attend birding workshops and courses. Here is their tribute to Ryan:

Ryan Beaulieu was a young ornithologist, environmentalist, and conservationist whose love of the earth and all its creatures and his desire to protect them was but one example of his spirit and wisdom beyond his years. He was 17 years old when a tragic accident took his life on August 27, 2005, during a birding trip in eastern New Mexico.Ryan was a member of the Central New Mexico Audubon Society, New Mexico Ornithologist Society, The American Birding Association, The Rio Grande Nature Center, Rio Grande Bird Research Group, and an originator and principal bander of the Rosy-finch Research Project at the Sandia Crest.Ryanâs gift was his love for bird watching and his connection to nature. His life was filled with the joy of exploration and discovery of nature, and this sustains his family, his friends, and the birding community of which he was a part. This scholarship fund was established âto give testimony to the living legacy of what Ryan gave to all of us as family, friends, and community.

2 Responses to “High Fives to an âAwesomeâ Birder”