Now that I have become the proud owner of a pair of snake boots, I took up my neighbor Scott’s open invitation to accompany him on a deeper hike into the wetlands adjacent to our homes. This area, located just west of the cities of Miramar and Pembroke Pines, is part of the Broward County Water Preserve, consisting mostly of land that has been set aside by developers to compensate for intrusion upon the historic Everglades by construction of housing subdivisions. Much of this is land that long ago had been drained and converted to agricultural use, mainly grazing of livestock. Now it is partially surrounded by low levees and managed by the South Florida Water Management District (SFWMD) under supervision of the US Army Corps of Engineers. As part of the Comprehensive Everglades Restoration Plan (CERP), the land was more recently cleared of invasive exotic plants, notably Melaleuca, Australian Pine and Brazilian Pepper. In the portion nearest our home, maintenance appears to have ceased since about 2005, and the exotic Melaleucas are once again spreading into the open wetlands, where they form dense stands.Under CERP, this wetland will be surrounded by higher levees and turned into a huge reservoir to hold storm water overflow from the planned C-11 impoundment to be constructed ten miles to the north, in Weston. The water depths in this planned lake will vary, depending upon rainfall, from zero to four or perhaps six feet. The objective of this impoundment is to limit eastward seepage of Everglades drainage, thus recharging the aquifer and reinforcing the historic north to south flow of the “River of Grass.” Because of funding and logistical issues, construction of the C-11 impoundment would not begin until at least 2015. Therefore, our local reservoir (designated as the C-9 impoundment) is on hold for at least ten years. From our standpoint, this is good news, as we now enjoy the presence of terrestrial species that will certainly be driven out when the area is flooded.  Here is an informative link about CERP, which includes the following map: 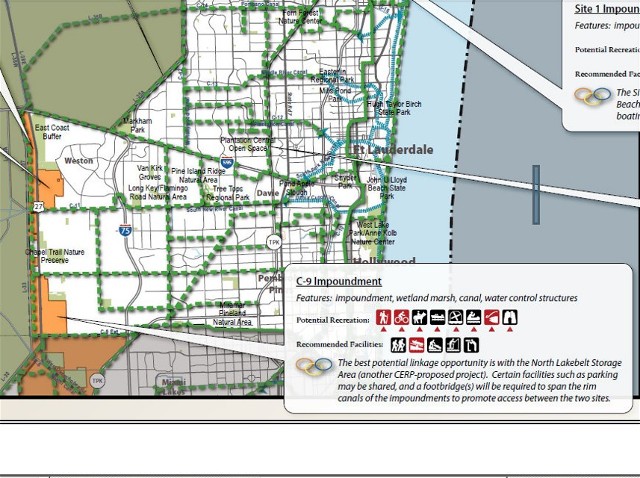 Water levels in our disturbed local wetlands weakly imitate the natural cycle of the original Everglades. An extinct quarry forms a large lake that occupies much of the Harbour Lakes portion of the preserve. Summer rains swell the lake and it spills over into the surrounding Sawgrass meadows. Sawgrass is actually a sedge, and it thrives when the soil is waterlogged for ten to twelve months out of the year. Water now covers the adjacent Sawgrass meadow. The waterway in the foreground will be a dry to muddy trail by late spring or early summer, but is too deeply submerged for our morning jaunt: Some parts of the wetland are better drained or are at slightly higher elevations, so their shorter hydroperiod (the length of time that there is standing water) favors beds of periphyton*, algae and other plants such as Spike Rush.

Large areas of freshwater marl prairie border the deeper sloughs of the Everglades. These relatively short-hydroperiod marshes are typified by a diverse assemblage of low-growing vegetation.  A complex mixture of algae, bacteria, microbes, and detritus that is attached to submerged surfaces, periphyton serves as an important food source for invertebrates, tadpoles, and some fish. Periphyton is conspicuous and is the basis for the marl soils present. The marl allows slow seepage of the water but not rapid drainage. Though the sawgrass is not as tall and the water is not as deep, freshwater marl prairies look a lot like freshwater sloughs.
A Great Egret stands in this marl prairie, which is covered mostly by rushes: In January, periphyton floats to the surface as the water level recedes: The areas free of Sawgrass are richer in nutrients and more friendly for wildlife, such as this American Bittern hiding among the Spike Rushes: Scott is a “working stiff,” so we met up at 7:30 AM on Saturday. To my surprise he had his little Yorkie, Gordo, on a leash. Gordo was to prove to be a enthusiastic and even useful companion for what turned out to be an ambitious five mile hike. We walked a loop north into Pembroke Pines on the unpaved Miramar Parkway/SW 196th Avenue extension, then cut south and west almost to US-27. At times we found ourselves in water up to mid-shins and sunk into ankle-deep mud. We departed at 7:30 AM and got back around 11:00 AM. This was our route, beginning and ending at the lower right (SE) corner of the map:

We walked mostly on remnants of old farm roads, which are blocked from vehicular traffic, but often used by recreational ATVs. The cross-country part of our walk was the southern portion of the loop in the upper left part of the map. There, we made very slow progress through a flooded prairie of Sawgrass. We followed animal trails (presumably deer) that tended to make circuits around deeper sloughs and alkali sink holes, but the going got so tough that we considered turning around when we had bushwhacked more than half way to our goal, which was the unpaved portion of SW 208th Avenue that runs north and south (along the far left side of the map). All this time I kept my camera safely tucked away. As we approached the road we heard dogs barking in the junk yard to the north, and when we finally emerged into the open we were greeted by a pack of eight to ten mixed breed hounds. Thankfully, they were more interested in Gordo, who diverted their attention as we made friendly talk with them and tried to act nonchalant. Before the dogs actually reached us we encountered a young Cottonmouth in the two-track road (note its bright coloration and yellow tail; older moccasins turn dark with obscured markings) : I wondered how many snakes we had NOT seen during that part of the hike, and was really happy with my snake boots– except that it turned out that both boots leaked! The walk back was a bit squishy. A Red-bellied Woodpecker clung to an old telephone pole: Along the way, a Red-shouldered Hawk monitored our approach before flying off: Gordo found this pugnacious crayfish along the path. It attacked him, then me as I tried to catch it. They are known to change colors, and perhaps the red reflects its fighting mood (I took it home and it now resides in my aquarium– dull olive brown in color): Scott and Gordo on this trail, which follows the right of way for Pembroke Road:

Two Painted Buntings flew along the trail in front of us. I only was able to photograph the female, and she was a beauty: One of a pair of Northern Waterthrushes created a very pretty reflection in a puddle: Two Yellow-crowned Night-Herons were roosting at the site of last year’s rookery: Not to be overlooked were this roadside Loggerhead Shrike… …and a Gulf Fritillary: By the way, I sent the boots back to the manufacturer, as they were guaranteed 100% waterproof. They have already shipped out a replacement pair. Since they fit well and were quite comfortable (when dry) I will assume my problem represented a sample defect and will withhold any review of the product pending resolution of the issue.
11 comments