Last week, while I was still in Illinois, I received an e-mail from Michael Fullana, a professional photographer who lives near our Florida home. He had seen one of my Bobcat photos on the Internet and was surprised to learn that they could be found so nearby. I gave him detailed instructions and within a day or so he was out before dawn in the wetlands next to our subdivision. He was able to get two photos of a very handsome Bobcat a little after sunrise. 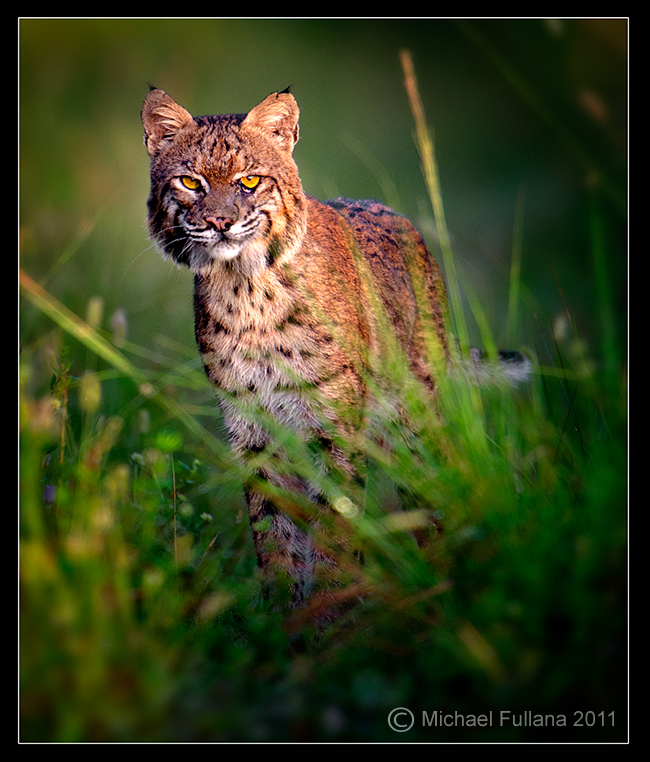 Obviously, Michael’s photo was to die for, so I planned to get out early myself on the first morning that we did not have medical and dental appointments. Today we finally had no other obligations or early rain.

It was pitch black and there were no clouds when I left the house at about 5:20 AM, slathered with mosquito repellant.  Away from the street lights, I walked along the unpaved roadway with a bright half-moon directly overhead. When I got to the spot where I usually cross over a berm into the protected area near the 196th Avenue Canal, I hesitated because it looked unfamiliar. The grass had grown quite high since my last visit over six weeks ago, and I have seen Cottonmouth moccasins here. It was just too dark. I had a little LED light on my key chain, so I used it to illuminate each step until I got on the open path where the moonlight revealed much more detail. It was too dark for me to proceed south on the trail along the levee where Michael had noted many Marsh Rabbits, a favored prey for Bobcats.This morning there were no rabbits to be seen– a bad sign? I tried to test fire my camera and there simply was not enough light.

Distant lightning flickered from a storm over the Florida Keys.As I waited in the dark, I noted the sounds around me, over the drone of mosquitoes. Tree frogs and geckos chirped like little birds. Purple Martins calls drifted down from the black sky. Night-herons squawked in the darkness. The first bird song I heard was the “Drink Your Tea” of an Eastern Towhee. Cardinals soon followed, along with one Carolina Wren. Mockingbirds were strangely silent. Boat-tailed and Common Grackles added their poor excuses for songs, along with a few Mourning and White-winged Doves.

In summer, here in the sub-Tropics, as Kipling said, “dawn comes up like thunder.” With the first bare glimmer of red in the east I attempted more test shots at various settings, but the shutter would not click.The sky rapidly lit up, and by about 5:50 AM I could get grainy exposures at ISO 3200, so I started walking slowly along the levee path. Mike said he got his photo at around sunrise, which was at 6:42 AM. I walked the quarter of a mile to the spot where he (and I, on several previous occasions) had seen the Bobcat. By then I could reduce the ISO to 1000 and take decent flash shots, pointing away from the path. My chosen vantage point was just off the main trail with my back to the east. One step forward permitted me to look both ways up and down the levee trail, which runs north and south. Directly in front of me, a side trail, already partially under water, led westward, deep into the wetlands. I waited, cautiously peeking from side to side every few seconds.

Suddenly, at about 6:20AM, I saw what I thought was a deer grazing at the edge of the path to the south. Forgetting that the flash was still on, I raised the camera and popped off a shot: The animal immediately looked up and I realized it was not a deer: When I checked the photos on the camera’s LCD display I saw the eye shine and realized the gravity of my error. The cat stayed in place for a few more seconds, and I took several photos without the flash: The above was the best of a batch of poor exposures. Because of the low light, there was considerable camera shake at ISO 1000. Worse, I auto-focused on some branches in front of the Bobcat. My manual focus shots were no better in the poor light. Vision problems with my right eye have limited my ability to focus sharply, and I just cannot get used to shooting with my left eye, as the camera is not friendly that way. Well, I will certainly try again, but not get out quite so early, and also will be extra careful about using auto-focus!

On the walk back along the path, I stopped to photograph this male Queen butterfly: A small bird flitted right across my field of view just as I depressed the shutter. It was a Carolina Wren, elusive as usual: Nearby, a Loggerhead Shrike was surveying its territory from atop a Melaleuca tree: A female Prairie Warbler was carrying an insect, almost certainly to feed a nearby nestling or fledgling: Prairie Warblers breed locally, and are one of the few warblers we get to see during the summer. After moving back and forth between trees with the insect in her mouth, she ate it, perhaps to help conceal the presence of its young. I have seen such behavior before in other species, though it would be hard to prove its motivation: Before heading home, I turned north on the unpaved stretch of Miramar Parkway/SW 196th Avenue and visited the Harbour Lakes impoundment portion of the wetlands preserve that I call the West Miramar Environmentally Sensitive Land (ESL).

The reflection of a Great Egret highlighted the still water along the opposite shore: A Red-winged Blackbird sang “Conk-ra-lee!” at the edge of the lake: This Florida Box Turtle was crossing the gravel road while the sun was getting higher and hotter. As I approached I heard him hiss when he saw me: “(Oh) Shhhhhhi…t!” He tucked in his head and legs and looked out only after several minutes had passed: He might be slow, but his eyes sparkled with life: After I took these photos I carried the turtle over to the shade of a grass clump on the side of the road. I turned away and within seconds he was actually running to the safety of the deep grass further back from the road!