After an all too brief visit to Denali, we set out on a rather daunting 400 mile drive south to the Kenai Peninsula. I learned from the locals to pronounce it “KEEN-eye,” rather than “ken-EYE.” Our daughter and son-in-law shared driving duties with me, which contributed to a much more relaxing experience. Early in the day, we encountered some rain, the only daytime showers we had during the ten days we spent in Alaska. This is a continuation of the narrative of our Alaska journey, which begins at this link.

Retracing our path to Anchorage, we followed Alaska Route #1 south and then eastward as it followed along the shore of Turnagain Arm. This part of Cook Inlet gained its name because early explorers, in search of the Northwest Passage, found this long eastward extension of the Inlet to lead only to a river. Frustrated, they had to turn around again. The road follows the Alaska Railroad, which opened up the Kenai Peninsula to travelers.

Here is the route we followed: 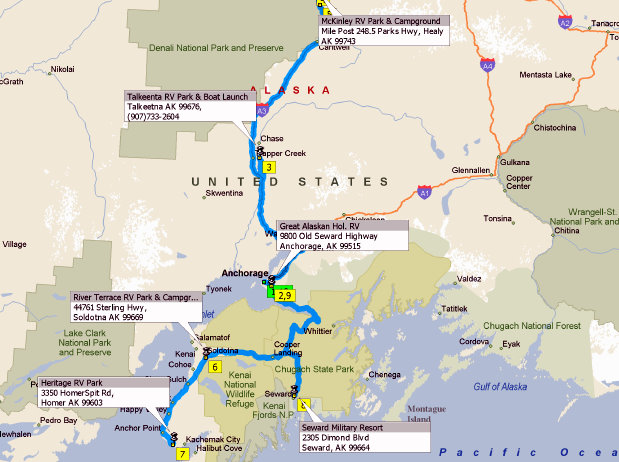 In a past visit to Alaska, Mary Lou and I had watched a pod of Beluga Whales feeding right along the highway, but this time the tide was so low that the mud flats extended as much as a quarter mile out from the shore. Tidal fluctuation is extreme, averaging about 25 feet. It was just past ebb tide, and at one point we saw a rather violent wall of water moving rapidly in across the flats as the tide started rising..

Reaching the end point of Turnagain Arm, the highway doubles back to the southwest through spectacular mountain ranges of Chugach National Forest, joining Sterling Highway near Cooper Landing. The road then enters the huge Kenai National Wildlife Refuge, and roughly follows the Kenai River as it courses towards its mouth at Cook Inlet on the west side of the Kenai Peninsula.

After driving about eight hours, we reached Soldotna, where we camped at River Edge RV Park, on the Kenai River. This section of the river is famous for its salmon runs, which peak around the beginning of July. Fishermen flock to the area and RVs clog all the campgrounds. We found it almost empty, so we had our choice of parking locations.

We took a space right beside the river. Wooden steps lead down the steep bank to a boardwalk that extends about 100 yards along the water’s edge: Our daughter and her family wasted no time getting down to fish for  Dolly Vardin and Rainbow Trout. Naturally, I found time to bird when I wasn’t helping the girls keep bait on their hooks and untangling their fishing lines. The older (seven years old) granddaughter caught the first fish, a 2 inch minnow.

Graci was very proud of her catch: We saw lots of eagles. This is part of a sequence to show a Bald Eagle landing in a tree on the other side of the river: Under rather heavy overcast, the Arctic terns were flying by non-stop and usually distant, so my shots all came out either blurred or soft Since we were in Alaska during the Summer Solstice, the days were very long. The sun didn’t set until after 11:00 PM and rose around 4:00 AM. The sky remained bright and blue all night. We stayed up late and it took us a few days to adjust our sleeping habits. I got out early to look for land birds around the campground.

I found a small flock of Boreal Chickadees. They moved fast, and it was difficult to keep them in view: This little one looked very scruffy, as if ready to molt: My iPod Touch got fried the first night of our trip, when I charged it with a third-party AC charger . It contained the big Sibley Field Guide app, so I had no help in identifying unfamiliar birds. I also lost access to my e-mail and Flickr accounts, but WiFi reception was spotty in most locations anyway.

Glacous-winged Gulls were common along the river: There were many Bonaparte’s Gulls. Like the terns, they were usually on the wing and moving rapidly in the poor light: One Bonaparte’s Gull rested briefly as I watched the children fish along the bank: White-crowned Sparrows were the most common land birds encountered everywhere we stopped during our Alaska visit: A Red-breasted Merganser swam right up beside the boardwalk, but in the poor light I failed to capture the true beauty of its plumage: After one night in Soldotna, we broke camp at midday, and started out for Homer, only about 75 miles to the south.