A beloved uncle departs
Click on image below for YOU TUBE SLIDE SHOW: 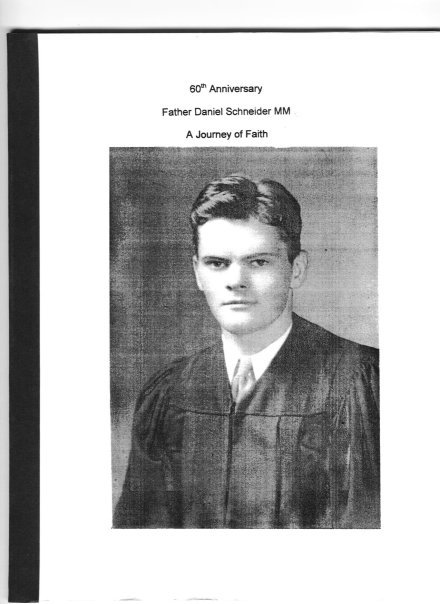 We lost a dear friend and uncle this week. My late Dad’s younger brother, Father Dan Schneider, passed away peacefully at Maryknoll, New York, where he was ordained a Catholic priest over 64 years ago. He would have been 92 later this month. As an 8-10 year old child, I remember visiting him at the seminary, feeding the pigs and chickens (in a sustainable farm on the grounds, now long forgotten), and, in a hedgerow next to the lawn, finding a Chipping Sparrow nest that was constructed entirely of horsehair. Dan was the first graduate of our High School to become a priest, and I swelled with pride at his first Mass in our little stone church in Rutherford, New Jersey. He spent years as a missionary in Korea, and I wrote letters to him, addressing him as something like “Tan-Ya Sawn Sin-Poo.”

Happily, he was back in the USA to perform our marriage ceremony nearly 50 years ago, to baptize our first child (who is also his first grand-niece) and to be with us when we buried our youngest child. He loved being outdoors, he loved cookouts, and he embraced us all in his love of life.

I’ll never forget the time when Father Dan visited us when we lived in Dallas. We all drove out to a local park to roast hot dogs. When the charcoal had heated up, we reached for the franks– and realized we had left them home! Unflappable, Dan told the children how much he liked mustard sandwiches. We toasted the buns and spread them with mustard, and everyone thought they were great!

The arrangements for his funeral were uncertain, so we booked flights for a six day visit to New Jersey, planning to stay with my brother and his wife on Great Bay, not far from the Brigantine Unit of Forsythe NWR. As luck (or Providence) would have it, an Ivory Gull, a rare species from above the Arctic Circle appeared at a marina in Cape May. Since the funeral was delayed until the last day of our stay, we had time to find the gull. How Father Dan would have enjoyed our account of this synchronicity.

Father Dan (L) with my late Dad at the church in Las Trampas, New Mexico. See this story about Dad. The two brothers often engaged in deep theological discussions over bourbon on the rocks: