This Brown Anole, on our back patio, was a willing subject: As a kid in the mid-1940s, I was fascinated by the idea of having a “chameleon” as a pet. My desire began when I read an enticing advertisement in a well-worn Johnson Smith Catalog. Among the ads for novelties, magic tricks, fake mustaches, midget Bibles and miracle cures, were those for two exotic pets.

The first was for horned toads, “Most interesting pets– amusement by the hour,” for 25 cents each, “By Mail, Postpaid. Safe Live Delivery Guaranteed.” According to the ad, “The horned toad can live for a very long time. Just how long, nobody seems to know.”

The second, for “Chameleons” also 25 cents each, really captured my imagination. “Watch it change its colors. Study its habits. Wear one on your lapel as a curiosity… No trouble to keep. Can go for months without food… Also grows a new tail.” While the text described a true chameleon (mainly from Africa and Madagascar), the illustration was that of a green anole, a lizard native to the southern states. For 10 cents more, postpaid, you could purchase a little collar and chain with a lapel pin. 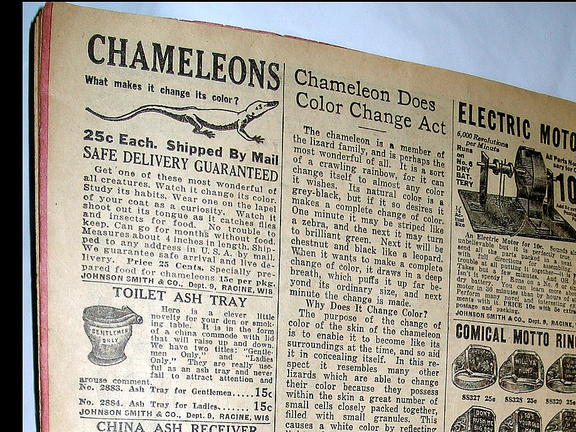 Well, my Mom never let me buy either. Some of my friends did wear the little green lizards on their shirts, and one kid disrupted our classroom by exhibiting it there. They were so popular that I later found an escapee living on the big crabapple tree out in the back of our New Jersey home, quite north of its expected range.

When I was transferred to New Orleans in the 1960s, we found our yard to be full of green anoles. We also had some, along with fence lizards, at our next home, in Dallas. When we moved to Florida, I expected to see them here as well. Some green anoles are present in many nearby parks and in the Everglades, but they are losing to competition from the brown anole, an invader from Cuba and the Bahamas. So far I have seen only brown anoles on our property.

Am still experimenting with my new telephoto lens (Canon EF 300mm f4L IS USM). The macro setting worked for the anole portrait above, using autofocus. Attempting flight shots, but the field of view is restricted and it is difficult for me to get the birds in the view finder. The autofocus usually does not work under these circumstances, as the subject is too small. Most of my shots show only blue sky, usually out of focus. The following two attempts were partially successful; both required manual focus.

A Least Tern hovers over the lake. Judging from the vector they fly after catching fish, they may be nesting on the roof of a nearby strip mall. This Anhinga was almost a speck against the blue sky. The image stabilized lens helped me get a sharper image at this distance. I set the manual focus on infinity. The above detail of scanned page from an old Johnson Smith catalog is from:
http://flickr.com/photos/oldcatalogs/sets/72157604630668819/show/