As a Cub Scout, I longed to grow up into a full-fledged Boy Scout. I worked through the ranksâfirst the Bobcat pin, then the blue uniform and the Wolf, Bear and Lion badgesâ¦ and finally WEBELOS, whose motto was a secret anagram made up of letters from each Cub rank. We were privy to its meaning: âWeâll Be Loyal Scouts.â Once I turned 12 and graduated out of the Pack and into St. Maryâs Rutherford Troop 8 my zeal faded somewhat, and I never made it to Eagle. However, I really enjoyed the hikes and the nature study.

The highlight, and the finale, of my scouting career was the Historic 1950 National Jamboree in Valley Forge, Pennsylvania. It was only the second such gatheringâthe first, in Washington, DC,  was to have celebrated the 25th anniversary of the scouting movement in 1935, but it was postponed until 1937 because of the polio epidemic. The event was awe-inspiring. The tents of 45,000 boys and their leaders filled the historic battleground. Insignias and patches were actively traded. After a couple of days nearly everyoneâs uniform was unadorned, except for strands of various colored threads outlining where mothers had labored to affix badges and home town patches, formerly so proudly displayed. 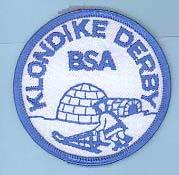 One emblem that I absolutely refused to trade was my hard-won white Klondike Derby patch. It celebrated my participation as a member of a team of âhuskiesâ who pulled a homemade sled over a quarter mile course at Garret Mountain in the dead of a late 1940âs winter. Significantly, it was a particularly warm day and it had not snowed for weeks, so we dragged the contraption, or what was left of it, over mud, brush, gravel and rocks to a triumphant finish. No, I would not trade that badge for anythingâ¦ well, almost.

A troop from Lubbock, Texas occupied the tents nearby. We marveled at their exotic accents. I coveted their captivesâ a cardboard box full of Texas Horned Lizards. I watched as one kid after another traded away his earthly possessions in return for a scaly creature. Their supply dwindled down to only two or three âtoads.â

Finally, I could stand it no longer, and entered the tradersâ den. They drove a hard bargain, seeing the greed in my eyes. I parted with my pocket knife, all my loose change, and of course my “Rutherford New Jersey” shoulder strip and troop emblem, but they ruthlessly insisted on having my Klondike Derby patch as well. The pain of hearing the felt tear away from my shirt pocket was soon overshadowed by glee. I placed the lizard into a paper bag and carried it with me and even kept it at my side as I slept. Nothing, including appearances and 4th of July speeches by both President Truman and General Eisenhower, was better than having my own âHorny Toad,â whom I imaginatively named âTex.â

Eagerly, I anticipated bringing it home to New Jersey, to show all my friends and enjoy seeing how jealous they would be. We returned home late, but before bedtime I prepared a habitat for my new pet, a large glass bowl with sand and a rock. First thing in the morning, anxious to make the animal feel that it had returned to sunny Texas, I placed its enclosure out in the center of our back lawn, away from any un-desert-ly shade. He seemed happy and became quite active. The neighborhood kids were duly impressed, watching it bask in the noonday sun. I went into the house for lunch, then hurried back to see Tex.

He was lying very still, probably enjoying the Texas-like climate, or so I thought. When Tex failed to respond after I poked him, I got worried. Mouth-to-mouth resuscitation had not yet been invented, but if it had I probably would have been puffing for hours. Hyperthermia was not then in my vocabulary, but that is what killed Tex.

That marked the end of my scouting career. I never filled the vacant spaces on my uniform shirt, just didnât have the heart. I still miss the Klondike Derby patch and wonder whether that sharpie from Lubbock will be selling it on eBay one of these days.