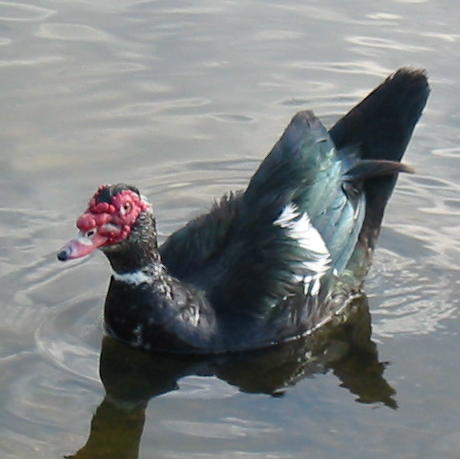 Early this March, a group of four Black Vultures congregated on our next door neighbor’s lawn, at the shore of our lake. They were tearing apart the dead body of a Muscovy Duck. Later in the day I took a look at the carcass, now little more than a bunch af feathers and cleanly picked bones. I did not think much of it until a few days later, when I noticed that tough old “Pato El Presidente,” the alpha drake who ruled our section of the lake’s shore, was missing. See previous blog entry about him here.

During the next couple of weeks there were many skirmishes between rival drakes, with two particular ones, a pure white specimen whom I named Whitey, and Whitewing (pictured, previously an incessant rival of El Presidente), appearing to have the upper hand. Discord among the ducks continued well into April. Whitey appeared to emerge as the new boss of our piece of the lake. Previously, Whitey’s territory centered on a home diagonally across from us, where the owner regularly fed the ducks and pigeons.  This must be the most prized territory on the lake, so perhaps Whitey was displaced to a lower position in the Muscovy heirarchy.

This spring, the third we have spent here in South Florida, we have so far seen no Muscovy Duck chicks on our 10 acre lake. Usually, by now there would be between 3-10 broods in various stages of growth. During March and April I found four nests on ours and neighboring properties with eggs that failed to hatch. One nest just off our patio contained 14 eggs and the hen incubated them for well over a month before abandoning them, all intact.Could this be due to the instability of the social order that was caused by the loss of El Presidente?

I wonder whether this is unique to our lake, or has anyone else noticed it? Could the nesting failure be related to the record drought conditions that have brought our lake level down by almost three feet? With the low rainfall, is it possible that the pesticides from residential lawns, or the herbicides that the South Broward Drainage District regularly sprays along the lake margin, might have become more concentrated and thus have an unexpected anti-fertility effect?

Are other local species experiencing similar problems? True, I am not concerned about the Muscovy population, but want to be reassured that this is not an indicator of any larger problem. After all, the web of life encompasses all of us.