When I was eight years old and my uncles had started going off to war, we moved all the way back up the street, right next to the same old White Front Market, to 139 Springfield Avenue. My parents bought this house for $4300 ($100 down payment), from Police Chief Eddie Bigelman. His wife Helen invited my mother to see the house.  Mom loved it immediately. The down payment probably came from my paternal grandmother, Nora, as Dad was away on a business trip and Mom sent him a telegram saying “We just bought a home!”  Sadly, Grandma Nora (whom I called âSchotzieâ) died the month before we moved in. She was only 62 years old. Eddieâs father, Old Man Bigelman built the house around 1911, and my maternal grandparents lived right next door at #143. The two homes shared a common yard with several outbuildings and the driveway right in between. Grandfather Uriah (âPopâ), helped Old Man Bigelman build the house (his family said they never used a square or a level).  No two windows were the same size. The sub-floor was made from packing crates. They had East Indian and other foreign writing on them that could be seen on the basement ceiling.

Doctor Louis Cartnick (a dear family friend as well as the family doctor) lent my parents the balance of the money, which they paid back at about $36 - $39 per month at 6%.  My mother thought the interest rate was excessive.  There were some hard times when they could not make the payments, but “Doc” let the note ride along and it was paid up on time. Doc himself sometimes took payment in eggs and produce. Doc would later invite me to join him in his medical practice. (I declined, anticipating a more specialized career).

A fire bell for the volunteer fire department was located to the rear of the house.  It had a mechanical system with a weight that had to be manually cranked up like a clock.  The street corners in Rutherford had pull boxes, each with a unique code. We got to know most of them by heart. The telephone system connected them to the fire bell.  Even before the bell rang, we could hear the big hammer being pulled back, ready to strike out the alarm. In the 1940’s the bell tower was moved to the nearby fire house (Company #3) and eventually replaced with a horn before, in the 1990’s the Fire Department switched over to pagers. 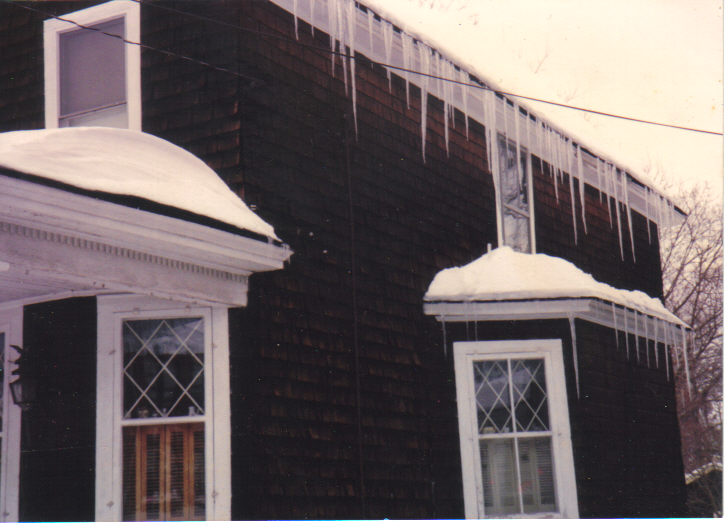 The three story house had brown painted wooden shingles and white trim, and a large covered porch that wrapped around the front and half the side of the first floor.  The big back yard had room for a Victory Garden, chock full of tomatoes, squash, beans and eggplants. Dad finished the third story attic with wallboards and divided it into three rooms. He wanted to use them as extra bedrooms, but in the summer it became unbearably hot and was very cold in the winter. Many years later I would again see one of those wallboards. Dad sold the house in January, 2002 for $160,000.

On June 27, 2003, we hosted a family reunion in Rutherford at Firehouse #2.  Dad, then 96, was to die a few months later. All Dadâs surviving siblings attended: Father Dan, Joe, Jerry, John, and Jean.  All his children and most of his grandchildren were there, a total of over 65 people in attendance.  He was in great spirits and took part in the celebration. 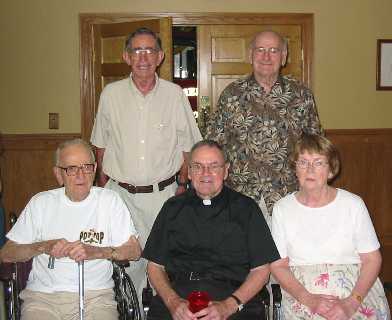 Remarkably, the owner of the old house at 139 Springfield (our family’s home for nearly 60 years) had planned to tear it down that very day!

The volunteer firemen had conducted training in the structure the day before, knocking down doors and smashing through walls. Since my brother, Dan was a former fire chief, they knew the house. While demolishing the walls, they encountered a piece of unfinished wallboard in the attic, upon which our family had recorded significant events since the 1940s, many of which I still remember clearly: “27 inch snow today”…  “Erie RR ran the first diesel through town today”… “They just made Springfield Avenue a one-way”… “Uncle Googs died yesterday”… “Ken got hitched”… “The Chevy finally gave out”…  The firemen surprised us by displaying the wallboard at the party.

See earlier posts about my two previous homes, all along the same street as this one: