Earlier this month, I decided to leave my parsley plant to the mercy of the Black Swallowtail caterpillars that were devouring it at an alarming rate. The early larval stages (termed instars) molt several times, changing their appearance more or less dramatically between molts. The earliest instars are dark and have a white saddle, making them look very much like bird droppings. 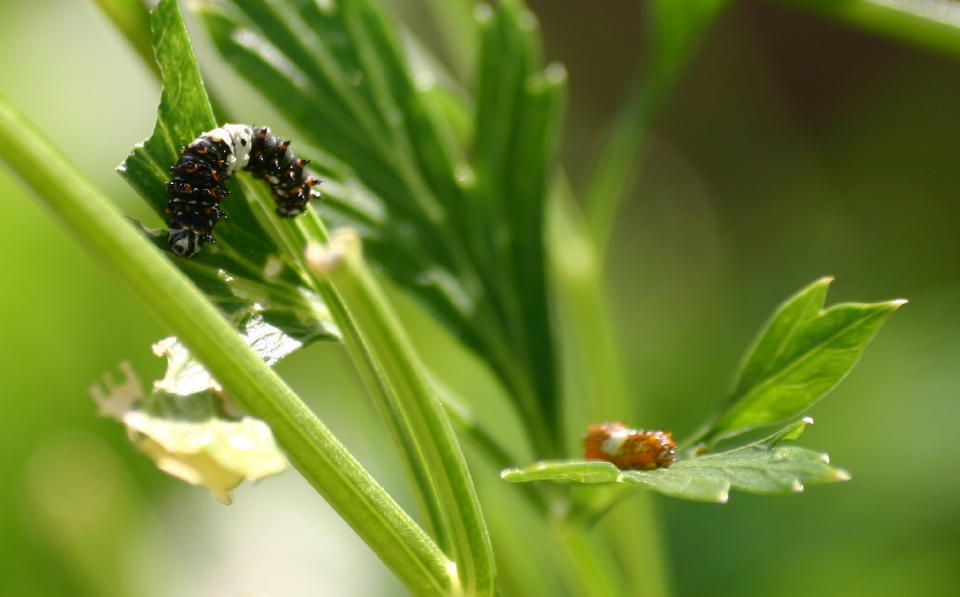 Some of the earliest instars, somewhat tan in color,  were only about 4 millimeters long. This one was about 11 millimeters: 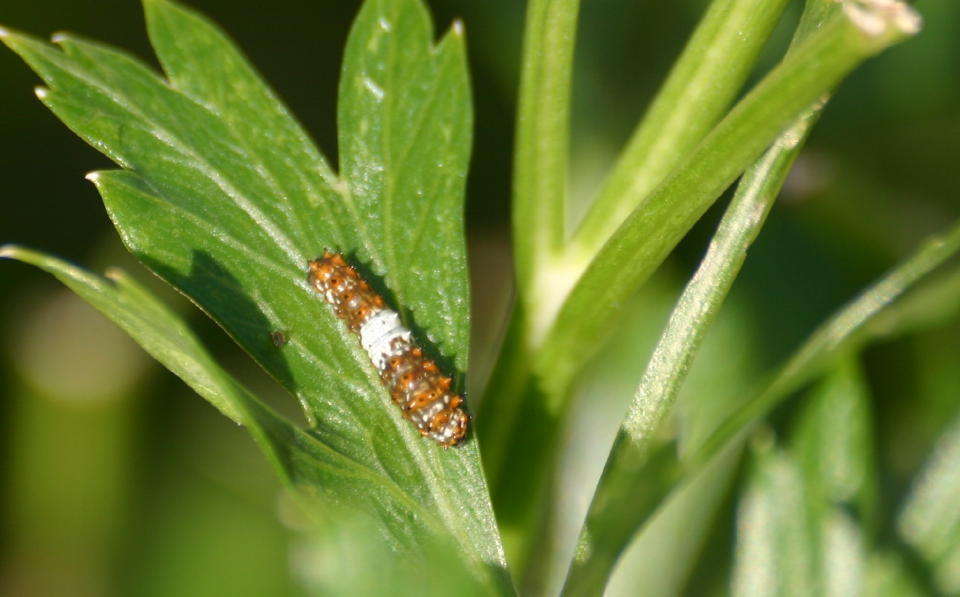 This one was older and darker, measuring approximately 16 millimeters: 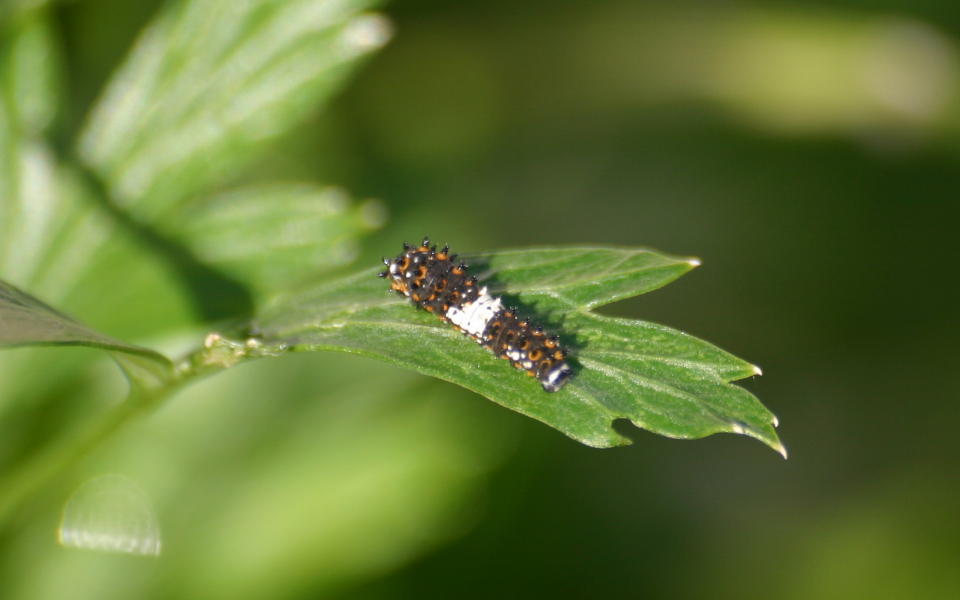 After another molt, about two days later, this caterpillar retained some of the white saddle.It measured about 2 cm. 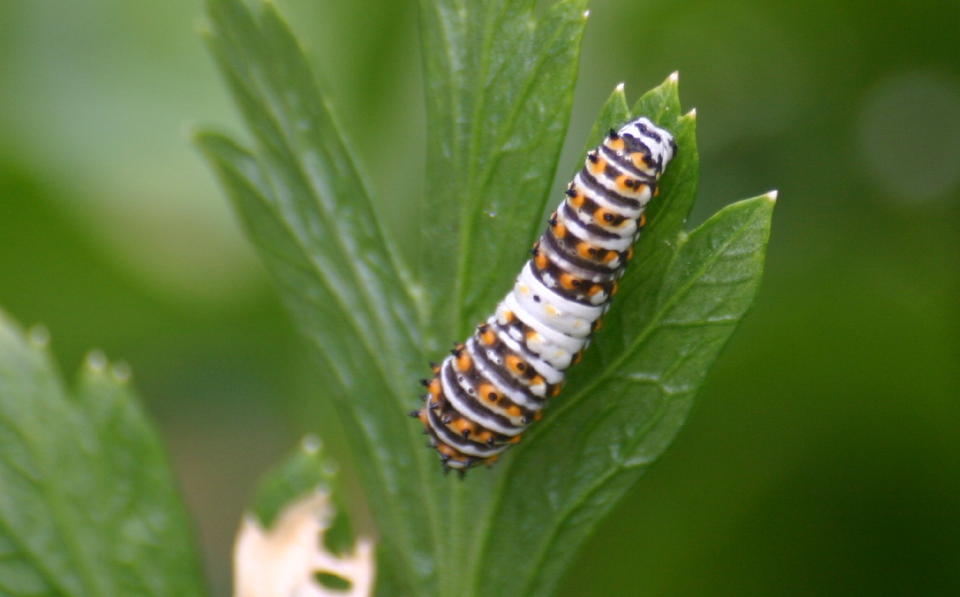 When I first discovered the infestation, there were several caterpillars in more advanced stages. I decided to watch them to see if I could find a chrysalis. One by one, they disappeared , and hard as I  tried, I could not find any among the parsley or nearby plants. 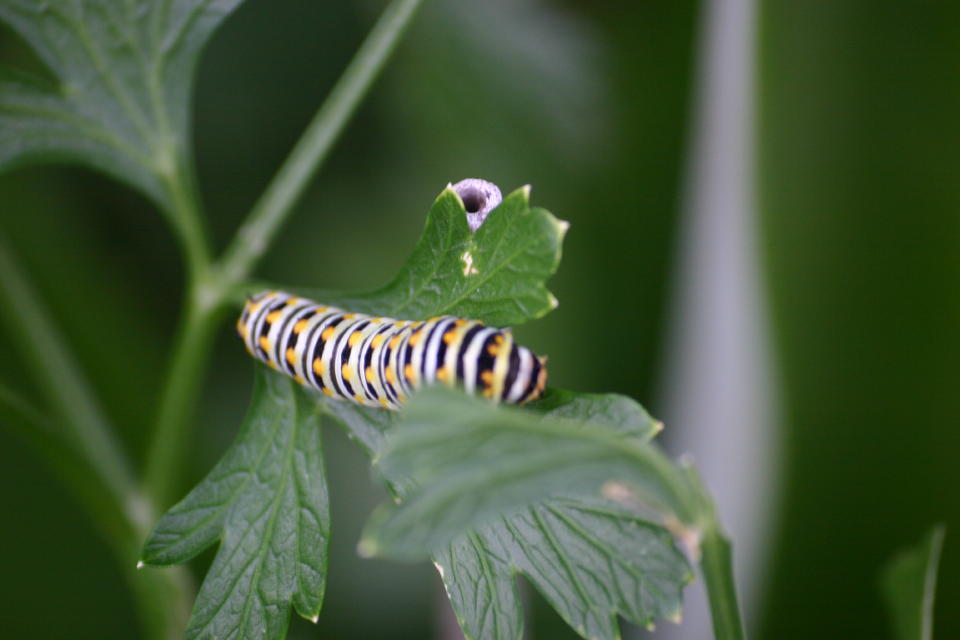 When there were only two left, I collected this one and brought him into the kitchen on a generous sprig of parsley, hoping to watch it pupate. 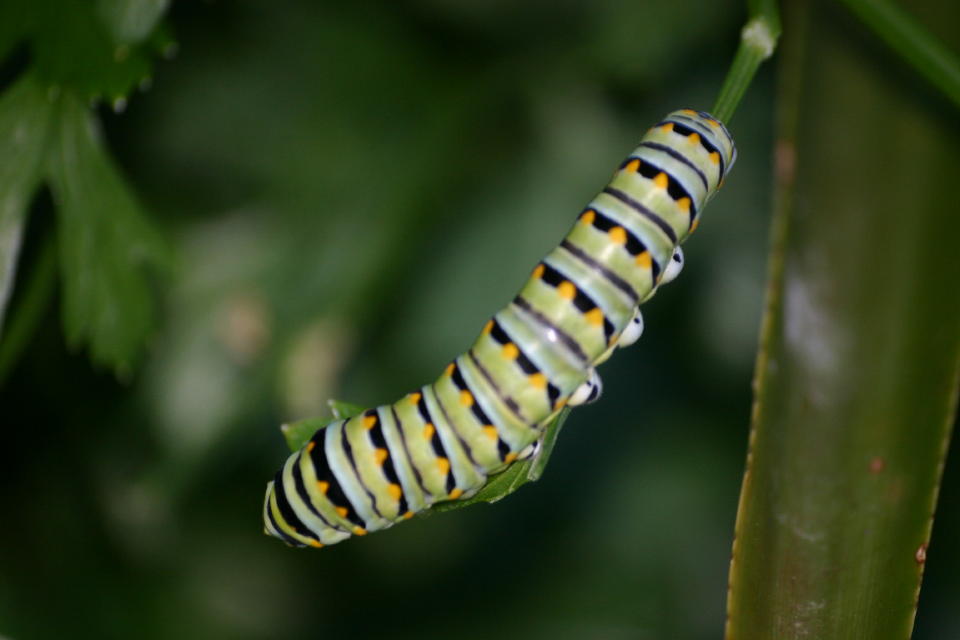 The caterpillar was truly an eating machine, devouring entire parsley leaves in a couple of minutes and depositing large amounts of feces. Its head area began to swell noticeably. Then, on the third day of captivity, it stopped eating and assumed this crooked position, remaining immobile for the entire day. Note the strand of silk that it had spun as a kind of sling that will help support it as a chrysalis. 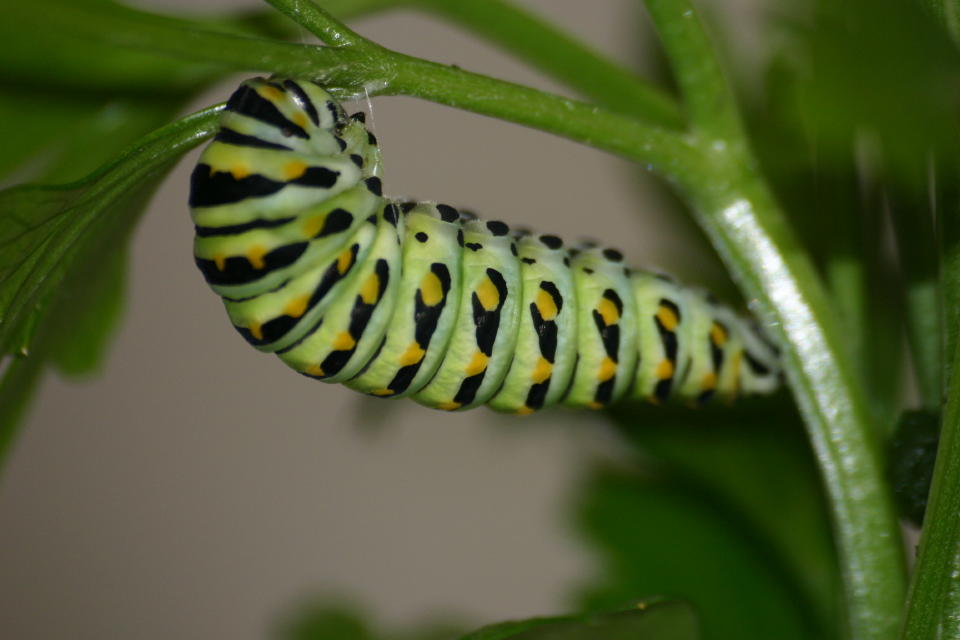 I hoped to see it actually morph into the chrysalis, but it looked about the same when I went to bed at 11 PM. The next morning, I first thought it had escaped, as it was nowhere to be seen. I was amazed how the new chrysalis blended into the parsley leaves. Its newly cast off skin was just underneath it. 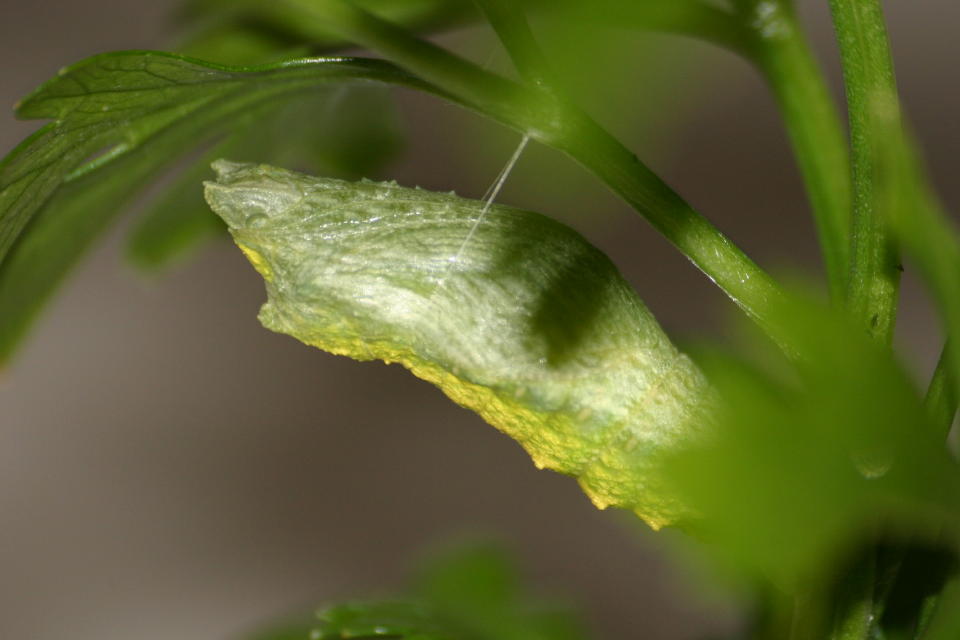 The protuberance under its head seemed to grow a bit by the next day, but its color and appearance were otherwise unchanged. 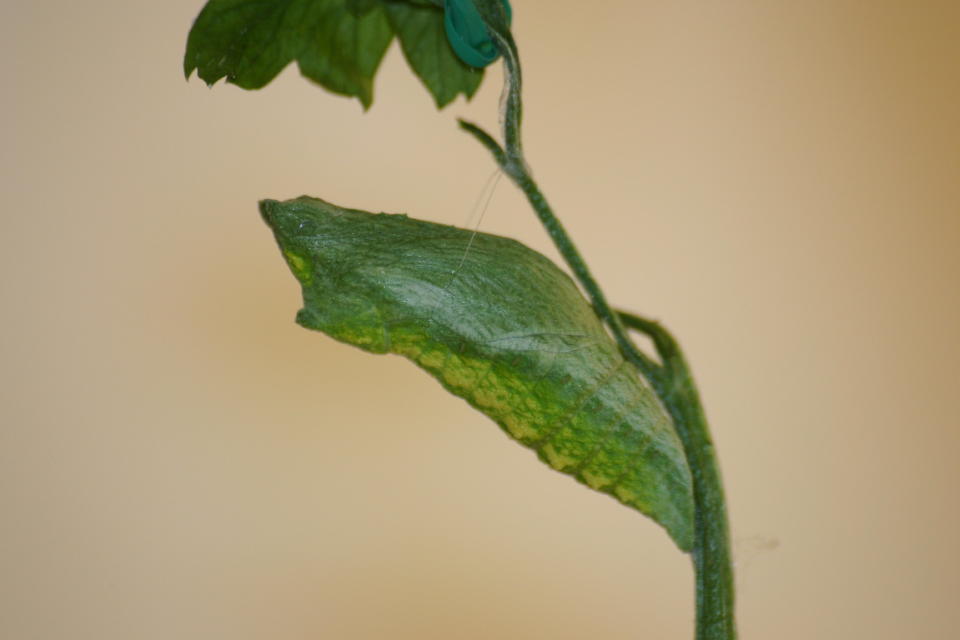 At about the one week point, the dark body of the butterfly inside the chrysalis became more apparent.On the ninth day, the wing spots were visible and we knew the butterfly was ready to emerge. We watched the British Open on TV, but did check a couple of times. 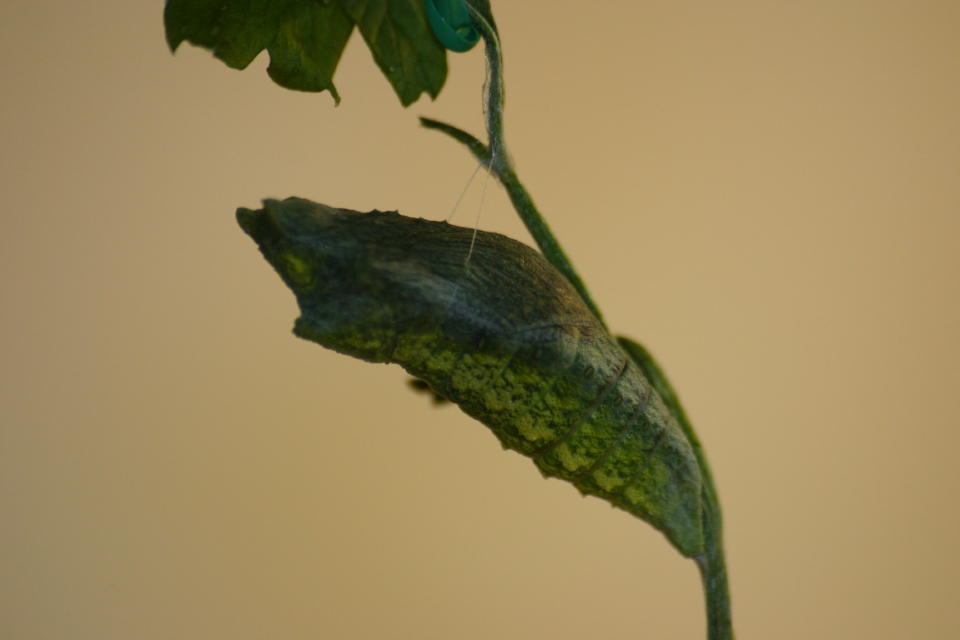 Just after 2 PM, the chrysalis appeared to be intact, but even more swollen and quite dark. Note the spots on the butterfly’s abdomen showing through the pupal case: 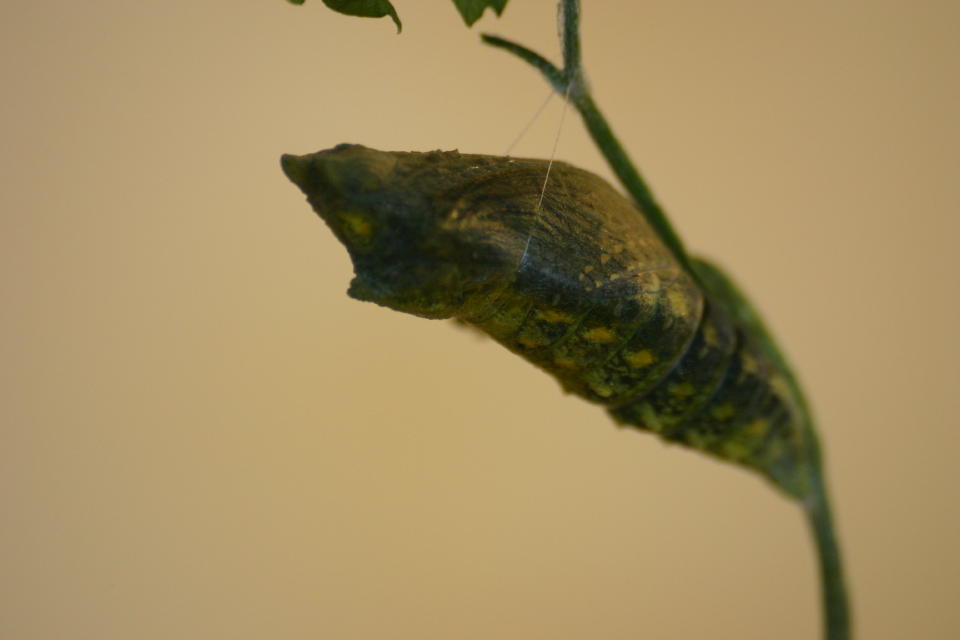 The British Open had a thrilling finish, and we forgot to check it until just after 4 PM, when we were greeted by the newly emerged butterfly, clinging to the empty chrysalis. Note how swollen the abdomen appears. It began to thin out as the insect pumped fluid into its wing veins:
: 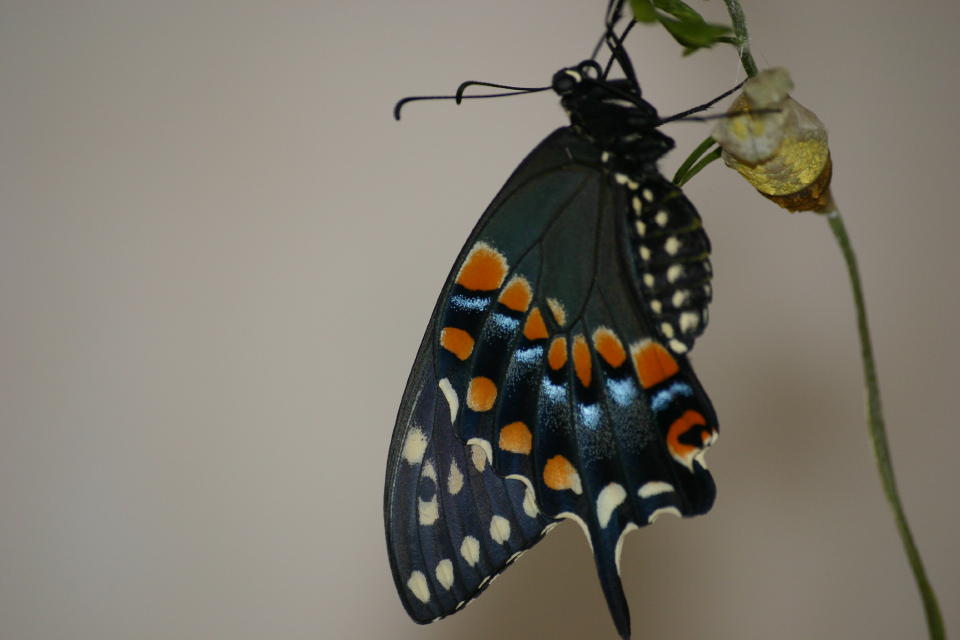 The Black Swallowtail had emerged. We brought it outside and I took a final photo. It flew away a few minutes later. 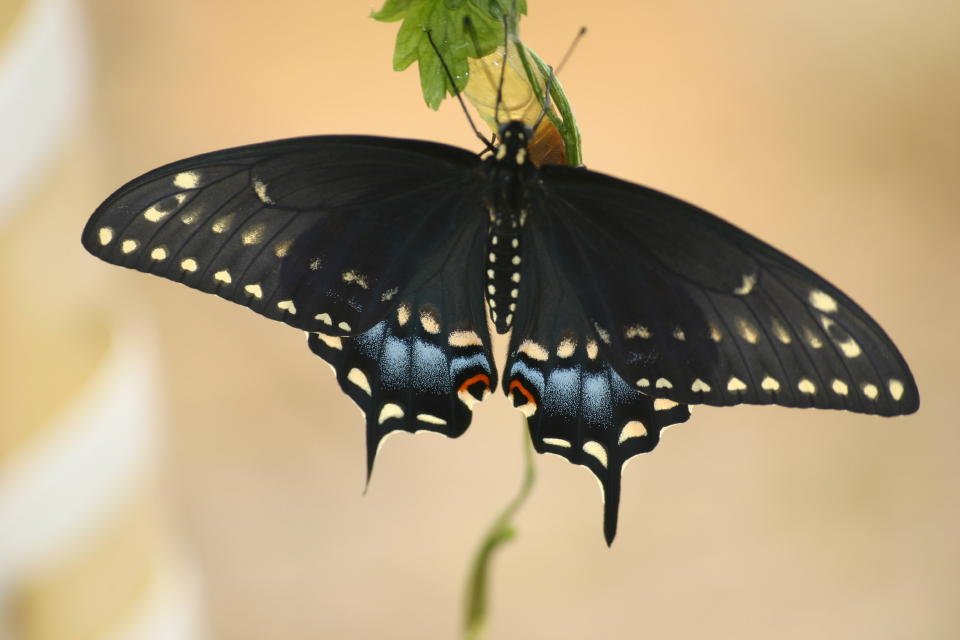 The row of yellow spots on the margin of the forewing and the blue band on the hindwing identify this as a female. To find out more about the life history of this butterfly, see Black Swallowtail species description in the Texas A&M Field Guide, and this excellent guide from Montana State University.