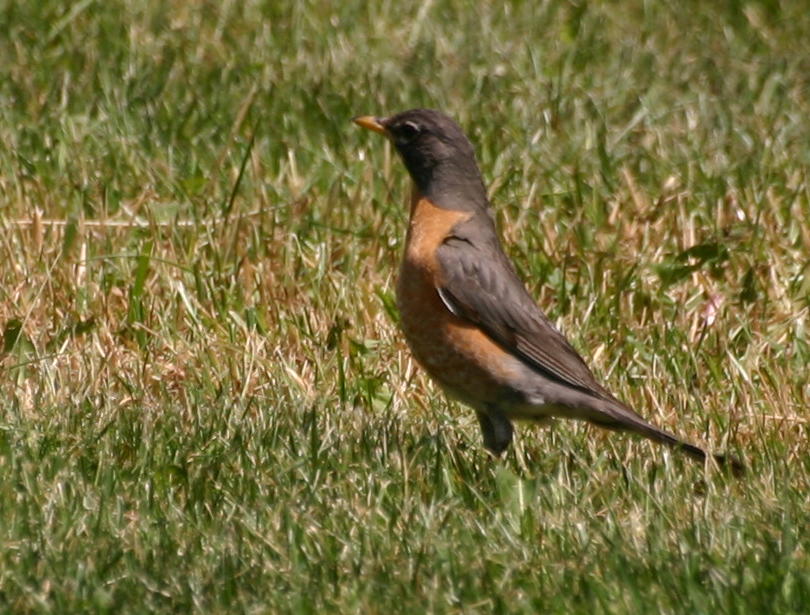 In the early 1940s my cousin Walter (âCorkyâ) and I often played on the extensive grounds of the Rutherford Womenâs Club, site of the Ivison Castle (pictured, now the home of Felician College)  that was just being transformed into Fairleigh Dickinson Collegeâs first campus. There were manicured lawns just right for playing stickball and flying kites. We were interrupted occasionally by a groundsman who chased us off. In the dark, we searched there for night crawlers and caught fireflies.

We saw lots of birds thereâwarblers in the Spring, nesting American Robins and Blue Jays in the trees, and Catbirds, Brown Thrashers and Wood Thrushes in the shrubs and blackberry bushes along the perimeter. The estate had majestic elm trees that harbored Red-tailed Hawks and the hanging nests of Baltimore Orioles.

Robins by the hundreds searched the 14 acres of rolling green turf for earthworms, cocking their heads (we thought) to listen for the slithering worms (but actually they were making the most of their acute monocular vision). We watched the Robins teach their speckled youngsters the skills needed to catch big ones on their own.

Then, early one summer, either in 1943 or â44 we encountered a âtameâ robin that permitted us to approach it closely and even pick him up. At first, thinking that it had grown so accustomed to seeing us that it recognized us as friendly creatures, we did not realize that the bird was seriously impaired. Soon more âtameâ Robins began to appear, along with others that were obviously ill and in distress.

Corky and I took some of the sick birds home and attempted to nurse them back to health by keeping them warm and forcing them to drink water. I even tried using some of my baby brotherâs vitamin drops in hopes of finding a cure. Every one of them subsequently died, and the lawns of the estate were soon littered with the carcasses of Robins.

My father said that maybe the birds were being poisoned by something. The subject of insecticides, much less DDT, did not come up. In fact, DDT had just been released for commercial use in the USA. I remember once seeing the big elms being sprayed from the ground with a milky looking substance, using high pressure hoses. My eight or nine year old brain was probably not yet hooked up to see the connection, or maybe I did get it and simply accepted the tragedy.

This was more than 15 years before Rachel Carson wrote Silent Spring. I did not know it at the time, but the worldwide epidemic of Dutch Elm Disease had just spread into New Jersey.

Although Dutch Elm Disease is caused by a fungus, it is spread by the Elm Bark Beetle, probably introduced from Asia. For many years, DDT was used in a futile attempt to control its spread. As I grew up I watched it ravage the famous elms that lined most of Rutherfordâs streets.

Little did I expect that, in the not too distant future, the âDuck Hawkâ (Peregrine Falcon) eyries along the Hudson River Palisades that I delighted in watching would be deserted, and the entire East Coast population of this species wiped out, because of the manner in which DDT concentrated at the top of the food chain.

The immutable law of unintended consequences was at work. During my tropical medicine fellowship in Central America in the late 1960s, I learned of the use of DDT to combat Bolivian Hemorrhagic Fever. The illness was believed to be spread by an ectoparasite (flea, louse or mite) of roof rats and Vesper Mice, as the rodents were found to harbor the causative virus. DDT was applied liberally in thousands of homes. DDT happens to be toxic to housecats, affecting their nervous system. The rats and mice prospered, parasite-free, while the cats, that previously held their population under control, died. As it turned out, the deadly disease was spread to tabletops and food bins, thence to humans, in the urine of the now-ubiquitous rats.

On Guatamalan coffee plantations I studied parasitology and took biopsies of workers whose bodies teemed with the larvae of Onchocerca volvulus, the worm that causes river blindness (Onchocercerciasis). This organism spends part of its life cycle in the body of the Black Fly that lives in fast-flowing mountain streams. The Rockefeller Foundation funded a huge program to poison all the creeks with bags of slow-release DDT. This was quite effective in reducing the Black Fly population, but what were the other long-term consequences?

The connection between DDT and the deaths of birds, particularly Robins, was not recognized until the late 1950s but was effectively covered up. Rachel Carson had to overcome great opposition from the chemical industry to finally get her book published in 1962. The irony of people killing the predator instead of the intended prey is brought out in the following abstract from the journal Ecology:

Avian populations in Hanover, N. H., a town that has sprayed its elms with DDT for many years in an attempt to control Dutch elm disease, were compared with those in Norwich, Vt., a town 1 mile (1.6 km) west of Hanover that has never sprayed. Hanover applied 109 lb DDT/acre (2.1 kg/hectare) in April 1963, then used Methoxychlor in April 1964. Population surveys were taken regularly during spring and early summer of these years, dead birds were collected in both towns, and 106 birds were analyzed for DDT, DDE, and DDD. Severe mortality of both resident and migrant birds occurred in Hanover during spring 1963, and the evidence implicates DDT as its cause. Robin loss was estimated at 70% of the resident population, or 350 to 400 individuals, but mortality among other species of widely varied feeding habits was also substantial. Feeding habits suggest that some birds acquired the toxicant by eating living insects carrying DDT, presenting the paradox of survival of the intended DDT victims, and death, instead, of insectivorous birds. Organ and whole bird analyses are presented and criteria for establishing cause of death are discussed. Most of the DDT had been converted to DDE and DDD, and residues were found in all organs analyzed. Robin mortality was reduced, but not eliminated following Methoxychlor application in 1964; these losses were believed caused by residual DDT in the soil. There was no evidence DDT poisoning among other species in 1964, though the dead birds collected were not analyzed. [Bird Mortality Following DDT Spray for Dutch Elm Disease. Doris H. Wurster, Charles F. Wurster, Jr., Walter N. Strickland. Ecology, Vol. 46, No. 4 (Jul., 1965), pp. 488-499]

One Response to “Tame (and Dead) Robins”