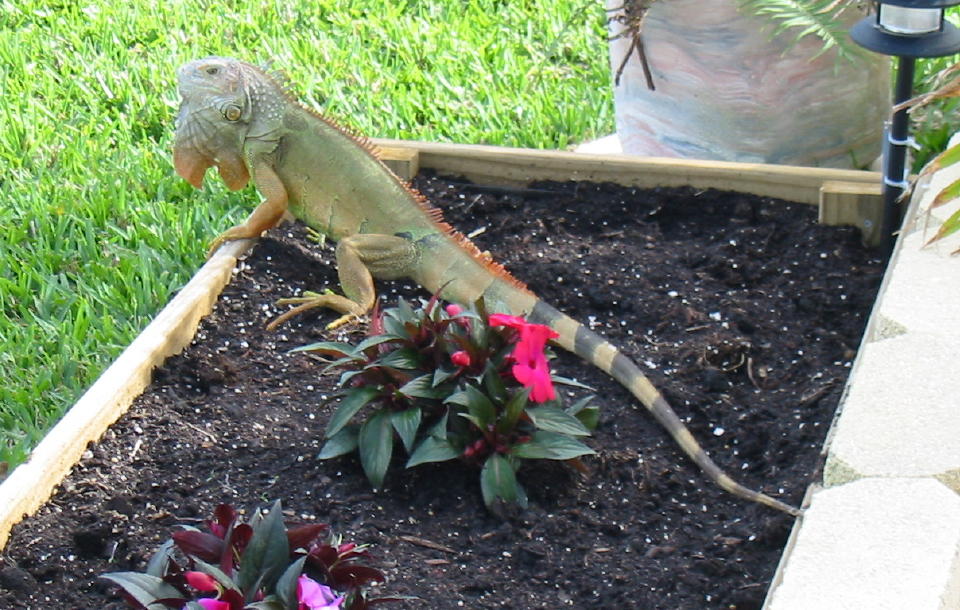 Yesterday, I set out some New Guinea Impatiens to fill the space in our planters created when I removed the tomato plants. Shortly afterwards, a three-foot long Green Iguana appeared on our patio.

These exotic reptiles, native to Latin America but descendants of released pets, are quite common in our parks and in established neighborhoods that have large trees. They are usually seen climbing on larger branches or sunning themselves along canals. This was the first Iguana  I have seen within several miles of our home. The trees in our neighborhood are less than five years old. Of course, the Everglades start only a quarter of a mile from our home, and these creatures like to follow waterways.

They are excellent swimmers, and account for many âalligatorâ sightings. Vegetarians, they particularly like hibiscus and impatiens flowers. Perhaps this one smelled some fresh salad. After I took several pictures of the reptile, it ambled off.

The Green Iguana represents but one of the 279 species of exotic wildlife (196 species of birds, 31 terrestrial mammals, 4 amphibians, and 48 reptile species) reported in Florida. An exotic species is one that was introduced by human activity and is free-ranging in an area to which it was not native before European settlement. According to Florida Fish and Wildlife, 107 exotic animal species have been breeding here at least 10 years (but not necessarily consecutive years). In addition, thirty-two (32) species of exotic freshwater fishes are currently reproducing in Florida freshwaters, more than any other place in the world.

My garden flowers themselves may be counted among the âGreen Aliens.â According to the Florida Exotic Pest Control Council, âApproximately 31% of the plant species known to occur in Florida outside cultivation are introduced (non-natives growing on their own). That’s 1,300+ exotic species established and reproducing outside cultivation. Of that number, about 10% are considered invasive in natural areas by the FLEPPCâ¦ (T)he second greatest threat to the 500+ endangered & threatened plant species in Florida is adverse effects from invasive exotic plants (the greatest threat is direct habitat destruction via population growth, urban sprawl, etc.).â

This Green Iguana Link  provides some interesting information about yesterdayâs visitor to our patio:

âGreen iguanas are an essential part of their native habitat, as are all organisms. As juveniles, they make a tasty meal for many predators. As adults, their fruit-feeding activities may help spread seeds in the habitat. Adult iguanas are not at risk from many predators, as they can defend themselves with sharp teeth and strong tails. If they make it to adulthood, they can be expected to live for 10-15+ years. There is one predator that the iguana is no match for, however â humans.âNative people often refer to green iguanas as âthe chicken of the treesâ, or âbamboo chickenâ. Green iguanas are harvested for their skin, meat and eggs. The time of year for iguana mating season varies from region to region, but it tends to fall in the months of January and February. Wild, gravid females are captured and their eggs are collected for food and to supply âiguana farmsâ with babies for the pet trade. While small-scale hunting is not a threat to iguana populations, large-scale harvesting, particularly to supply the pet trade, is.âAlthough large-scale hunting and egg-collecting activities threaten wild iguana populations, the biggest threat to the wild existence of these lizards is habitat loss. As the rain forests disappear, so to do green iguanas. Although they are not currently listed as threatened or endangered, they are certainly at risk, along with all the other inhabitants of these forests.â

One Response to “Green Aliens”