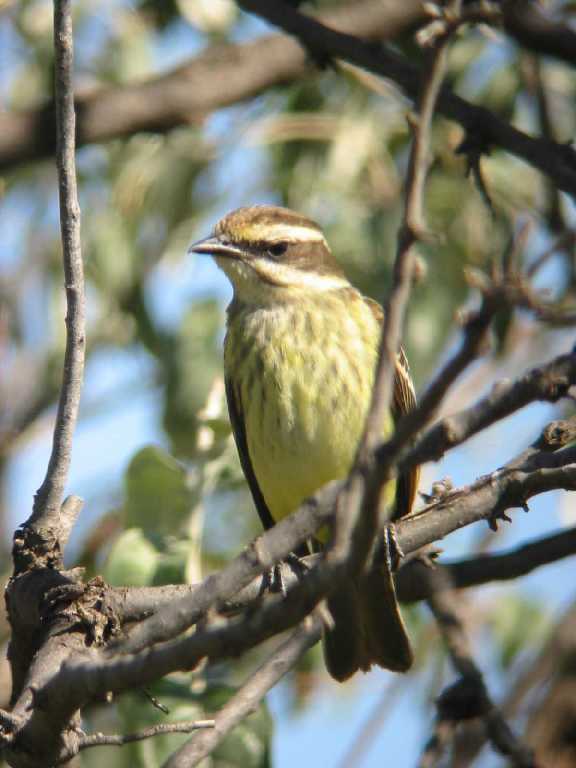 On September 12, 2003 a vagrant from southern Mexico suddenly appeared at Bosque Redondo near Fort Sumner, NM.  It was afterwards seen by multiple observers and identified as a Piratic Flycatcher, distinguished from the larger Variegated Flycatcher by its small bill, nearly unstreaked back and less extensive rufous areas on its tail. I was lucky to take several photos, posted here.

It gets its name from the manner in which it nests.  Rather than building its own, it harasses other species of flycatcher until they abandon their nests, then does some remodeling before laying its own eggs.

The breeding range of Piratic Flycatchers extends from Mexico and Central America down to northern Argentina and southern Brazil. The northern population migrates south from Mexico to Costa Rica between the months of January and February, and the southernmost population moves northward to spend the austral winter (our summer) the Amazon region. In March of 2006, another Piratic Flycatcher was reported from Bentsen-Rio Grande Valley State Park in Texas.

The following is an excerpt from:  http://animaldiversity.ummz.umich.edu/accounts/legatus/l._leucophaius$narrative.html

We missed seeing it when we stopped by on the morning of September 14 while on our way to Amarillo to visit three of our grandchildren.

On our way back to Albuquerque on September 16, we arrived at about 8:30 AM  to hear that it had been seen only 20 minutes earlier.  Luckily, we re-found it at 9:10 AM and observed it for almost an hour.  The bird ate Russian Olive fruits.  It hovered (fluttered rather clumsily) as it plucked the olives from the tree.  Once it made a brief foray and caught and ate a medium-sized dragonfly.  We did not hear any vocalizations.

This was only the third confirmed sighting of this ever recorded in the USA, the second for New Mexico. A photograph of a fourth Piratic Flycatcher, in Florida, was identified some time after it was sighted.