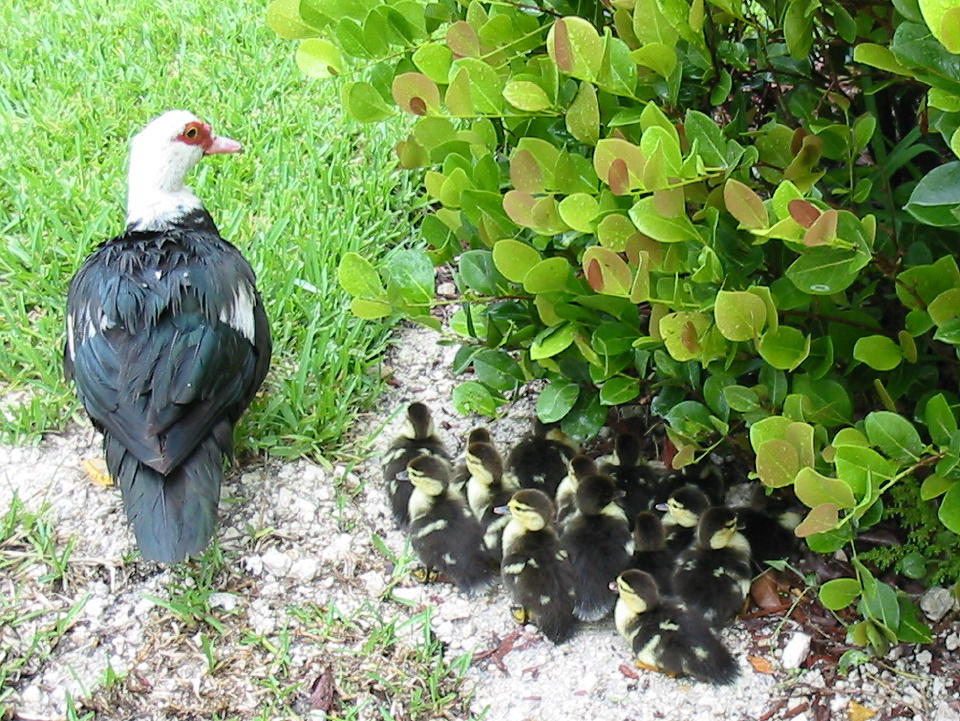 Following my observation of the Muscovy Duck infanticide I was curious about what else might be killing off the ducklings, as relatively few seem to reach adulthood. This is surely a good thing, as our lake (which is only about 1/4 mile long and about 200 yards wide at most) seems to be at capacity and there is much competition and territorialityâexcept when some resident or visitor feeds them bread, in which case they flock together and beg.

Early this year I found a hen sitting on 14 eggs under the Cocoplum hedge next to our back patio. Each time she left the nest she covered the eggs completely with down plucked from her breast, then camouflaged the nest with dried leaves. All 14 eggs subsequently hatched (photo), but her brood declined dramatically, day by day. I showed the nest to a young boy from Colombia who was visiting our neighbor. He dropped by to photograph the ducklings when they were 4 days old. That day there were only seven remaining, and the duck family was swimming about 15 feet offshore. Just as he went to take a picture, a large bass broke the surface and instantly disappeared with one of the babies.

Certainly, Red-shouldered and other hawks, Raccoons, turtles and larger herons also take their share of ducklings, but so far I have not witnessed any more ducks killing their own babies. The most serious incident I have observed since the mass infanticide that I reported in January, 2005 has been one case of a drake chasing after a hen with a brood of about 8 chicks that looked to be about one day old.  He tried to copulate while she was swimming near shore.  She shepherded her chicks out of the lake and they huddled together while she ran away from the drake on the grass, away from the chicks.  He chased her into the water and jumped on her, but she dove underwater.

To my surprise she swam away underwater, about 15-20 feet before resurfacing.  This evasive diving was repeated several times.  He seemed to finally catch her and may have been able to copulate.  Then he left her alone and she returned to her chicks after a few minutes.

After I reported the Muscovy infanticide on a birding newsgroup, other birders described similar observations. One lady who lived on a lake in a nearby community wrote that she had been trawling the Internet under the keywords “Muscovy, duck, infanticide” and had found my posting.

âI thought I’d get in touch because I have just witnessed the same behaviour as you describe re a Muscovy duck killing another’s chicksâ¦ (A)mong the many birds here is a  Muscovy duck who started out with 16 chicks a week or so ago, but every day she has one or two less. She is now down to just five. We presumed perhaps a raccoon was using them as snack material, but now we’re not so sure because earlier this evening there was quite a flap outside and I looked out to see one of the male Muscovies running off with a chick in his beak. He was being quite rough with it, dropping it on the ground and snapping at it with his beak before keep picking it up and shaking it etc. It was quite horrible to watch as he seemed intent on injuring/killing it.âThe mother duck, meanwhile, had taken refuge on top of our pool screen and was clucking loudly, which was what had caught my attention. Her other four chicks were lying in the grass without her protection. This is not the first time that we have seen this male bullying a mother with chicks, but it is the first time we have seen him try to kill one and we wondered if maybe he’s responsible for the loss of the others too. I took a few paces towards him and he dropped the chick, who I then shooshed into the water and guided him back to his mum, who by now had flown back down to protect her other chicks. The little one looked quite shaken up, but is OKâ¦ It’s quite bizarre andwhile I understand the need for natural selection and population control etc. this just seemed quite brutal for a duck to kill one of its own.âAnother Florida resident wrote: âMuscovies are not the only species to kill ducklings! I witnessed male mallards killing Muscovy ducklings by drowning in one of the small retention lakes at South Regional Library in Pembroke Pines many years ago (1990?) It was most unpleasant because I had taken my nieces (then aged about six and eight) to see the pretty ducks at the lake…it was a sad lesson in nature’s toughness.âA reader from South Africa added her observations, suggesting that parental inexperience may be a factor in this case: âI have a problem with my Mallard father.  He is killing his own ducklings. I went onto the web and found your writings about the problem. The hen laid 18 eggs. 16 hatched. In the first week the male started attacking the ducklings. He took them in his beak and shaking them vigorously, he killed four of them. Just as I wanted to intervene, he stopped. âNow, three weeks later, he started again. I caught him and put him into a cage,  but the mother did not stop quaking and he flew up against the wire.  I released him again but this morning he killed another baby. I was wondering if finding another female might do the trick. The ducks roam freely. They love to swim in the pool. As far as I know,  there was no disturbance or any stress for the ducks. The father duck was very protective at the beginning. Then all of a sudden he attacked the ducklings. âAt first I thought he was only teaching them some manners (ha-haaa) but soon realized it isnât case. This morning I separated the ducklings from the pair for two hours. As soon as I let them loose, he immediately attacked one.  So, the “awful stepmother” took him to the house next door and put him in a bigger cage further away from the mother and ducklings. I have phoned a friend of mine to find me another female, so I will definitely keep you posted. âMy friend told me that they encountered a similar problem two years ago. For no apparent reason, the male first destroyed some eggs,  and then attacked the ducklings,  killing them. This year though, he is an excellent father. She said they came to the conclusion the mister was just young. I sincerely hope this is the case.â
In Texas Nature Blogspot, a nature writer describes infanticide in Purple Martins and summarizes theories as to the cause and value of this behavior.