We enjoyed a scenic four hour drive from Homer to Seward, first retracing our route north and westward on Sterling Highway (Alaska #1). The early King Salmon run bypasses Soldotna for some reason, but upstream at Sterling, fishermen were lined shoulder-to-shoulder along the banks of the Kenai River. Joining Alaska #9 southward, we were treated to the rugged beauty of the Chugach Mountains. This is a continuation of the narrative of our Alaska journey, which begins at this link. 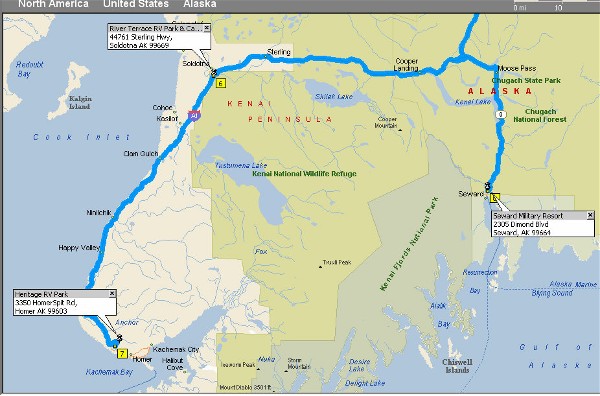 We stayed three nights at Seward Military Resort. That’s our 32 foot RV at the right end, with our older daughter’s 31 footer next to us: The views around the Resort were superb: After we arrived, sirens suddenly began to howl, and huge loudspeakers blasted out a tsunami warning! They said to get to high ground immediately, but all the road led downhill. The warning was repeated several times, then we received an all-clear with the explanation that it had been issued in error. There had been quite a large earthquake in the Aleutian chain that did cause some anxiety about the possible threat of a tsunami.

On our first full day in Seward, we took a dinner cruise to Fox Island in Resurrection Bay. Our trip coincided with the summer solstice, and the days were so long that it was difficult to keep track of the time. The sun did not set until after 11:00 PM, and rose a little after 4:00 AM. The sky remained bright and blue all night (In Denali, the days were 21 hours long).

Here is a view of the Seward harbor, taken after dinner, at about 10:15 PM. Note how few people are out on the docks: Our granddaughters (in pink) worked very hard at completing all the tasks necessary to qualify as Junior Rangers by the end of the cruise. They kept track of the wildlife sightings, and took their duties very seriously, even picking up litter in the dining area.

Here they are administered their oath of office: We were thrilled to see a Bald Eagle swoop down nearby and catch a fish. Here, it repositions its catch in its talons: The next day we took a 6 hour wildlife cruise the full length of Resurrection Bay. The weather could not have been better.
A pair of Marbled Murrelets in breeding plumage hurried out of the way of our ship. They are black and white away from the breeding season: The Marbled Murrelet (Brachyramphus marmoratus) is a small seabird from the North Pacific. It is a member of the auk family. It nests in old-growth forests or on the ground at higher latitudes where trees cannot grow. Its habit of nesting in trees was suspected but not documented until a tree-climber found a chick in 1974 making it one of the last North American bird species to have its nest described. The Marbled Murrelet has experienced declines in their numbers since humans began logging their nest trees beginning in the latter half of the 19th century. The decline of the Marbled Murrelet and its association with old-growth forests have made it a flagship species in the forest preservation movement. (Wikipedia)

The murrelets’ breeding colors provide camouflage in their treetop nests: Common Murres appeared rather more brownish than I expected. Note the agae-rich water in this fjord. The long periods of sunlight cause algae to bloom in mid-summer: We encountered a noisy herd of endangered Steller’s Sea Lions: In the distance, Mountain Goats rested on the mountainside: We saw many Black-legged Kittiwakes that were nesting in cliffs beside the bay: A large kittiwake colony was at the far southern end of Resurrection Bay: This Horned Puffin was the first one that either Mary Lou or I had ever seen: Now I have seen all three North American puffin species. For me, it was ABA Life bird # 579. I captured it in flight, my favorite bird photo from the cruise: We sighted another Red-faced Cormorant; its face does not show up very well, but its large head with two crests are characteristic of the species: Dall’s Porpoises frolicked in the open water at the mouth of Resurrection Bay. Note the white marking on their dorsal fins: A Humpback Whale surfaced and blew a few times– I missed all the good shots: Bear Glacier exhibits a central moraine, a line of rocks deposited where two glaciers came together: Our granddaughters surprised us by remaining out on the deck for almost the entire cruise. Sporting their Junior Ranger badges earned on the dinner cruise the previous evening, they followed Ranger Jen all about, asking her questions and “interpreting” for the passengers. They had memorized the names of every creature that was displayed on a poster in the galley. Here they are trying to see how long they can keep their hands in a bucket of cold water just hauled up from the waters of the bay. They are learning of the importance of blubber as insulation. (Do I sound like proud Grampa?)

The seven year old is on the left in the green jacket, and the six-year old is in hot pink with the white hat. They are broadcasting their observations over the ship’s intercom: Our two sons-in-law put in two full days of deep sea fishing. There’s a consensus– “We shall return!”: