As a child, back in New Jersey, I often took vicarious birding trips to the sub-Tropics. Roger Tory Peterson was my virtual companion (See my review of Birdwatcher: The Life of Roger Tory Peterson). I remember looking through my 1939 Peterson’s A Field Guide to the Birds at such exotic southern birds as the Wood Ibis (now properly known as Wood Stork), White Ibis and Limpkin. None of these three were included among Peterson’s glossy plates. The former appeared as an ink drawing of its head, comparing it to the White Ibis, which also was not otherwise depicted. (The Reddish Egret, another Deep South specialty, was considered to be so rare that it did not even deserve an image). 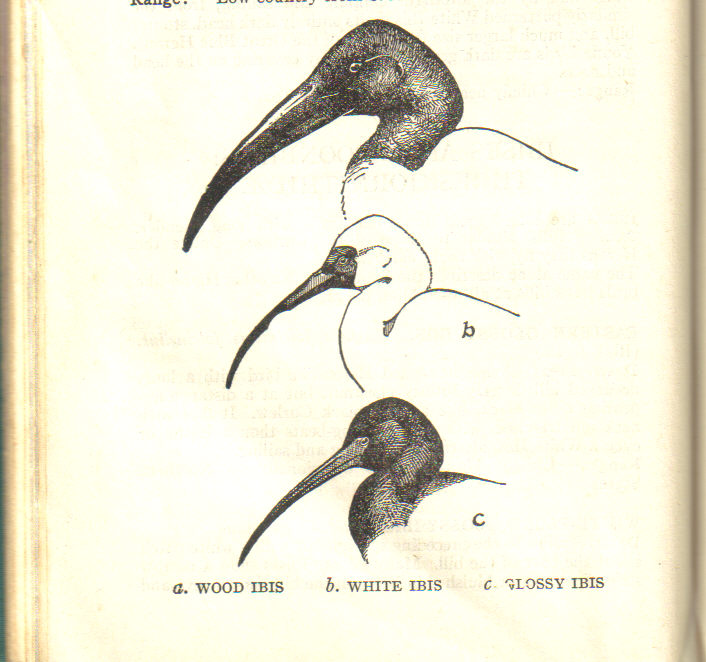 A Limpkin was shown calling, and Roger described its cry as “A loud, repeated wail, Kree-ow, Kra-ow , etc., especially at night:” 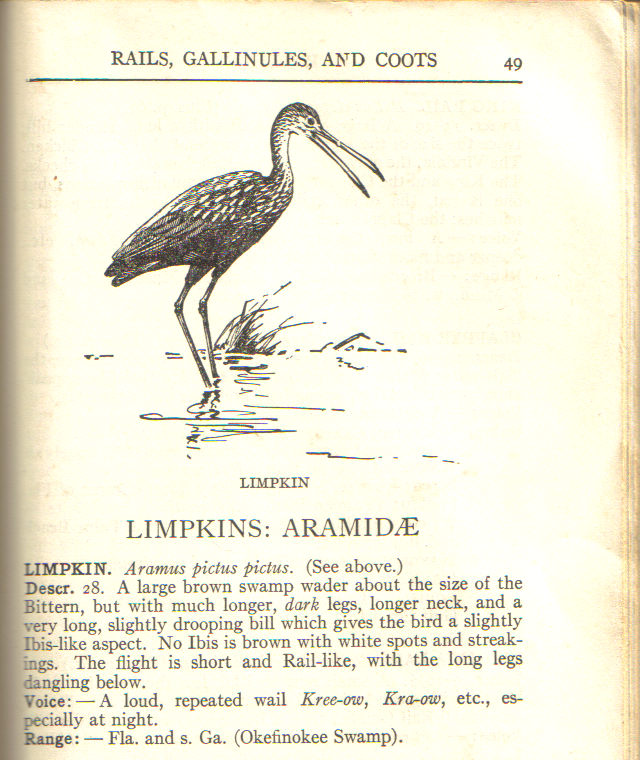 All these birds had two things in common: they were long-legged waders that I imagined moving through still water among moss-draped trees, and I held out little hope of ever seeing any of them. In those post-Depression days our travel was constrained by the limitations of our family car, a 1937 Ford sedan that already was showing signs of age. Its exhaust pipe spewed blue smoke, and Dad carried at least a couple of spare rebuilt fuel pumps and extra inner tubes so that he could install replacements when they failed on the road. (I eventually inherited this car and its problems, some aggravated by my own foibles: (Chickie the Cops!)

For our family, Florida was indeed a far-off place, as were destinations anywhere north of Derby, Connecticut, west of Philadelphia or south of Washington, DC. I held hopes of one day seeing a Northern Mockingbird, a Tufted Titmouse, or a Carolina Wren. Now, all three species are common there, but in my day they were rarely observed in the northern part of New Jersey. Happily, the Northern Cardinal, which disappeared from its northern range during the early 1900s, (presumably driven out by severe winters) began to repopulate the area around New York City in the mid-1930s and had become quite common in our suburbs by 1945. Similarly, the Tufted Titmouse population exploded there in the mid-1950s.

Of all the Florida specialties, I was most fascinated with the demure Limpkin, named for its halting gait, and famous for its haunting “mad widow” calls that pierced the night:

Across the Everglades: A Canoe Journey of Exploration by Hugh Laussat Willoughby (1898) “But the worst sound to sleep through is the cry of the limpkin. When do these birds sleep? or do they ever sleep ? We have seen them about all day, …” (Free e-copy of book available at link)

If ever I got to Florida, the Limpkin was the bird I most wanted to see. Highly specialized in its diet, the Limpkin subsists almost entirely upon Florida Apple Snails, which it can pluck from their shells in in 20 seconds. Its bill is specialized for the task, as it is compressed laterally like scissors, and its tongue is long, thin and barbed, the perfect tool for extracting the body of the snail.

Nearly extirpated from Florida 100 years ago by hunting and drainage of its habitat, the Limpkin’s population has recovered. Of greatest concern is the threat to the native apple snail by competition from introduced Channeled and Island Apple Snails, and by invasive exotic vegetation that replaces the snail’s food sources.

Mary Lou and I finally got to see our first Limpkin in August, 2002. Our daughter and her husband had just moved to Florida, and we were visiting them from New Mexico. Responsive to our desire to see a Limpkin, they drove us to Loxahatchee National Wildlife Refuge in west Palm Beach County. We all walked the trails, frantically searching for one, as the skies darkened and thunder boomed in the distance. Under the threat of the approaching thunderstorm, I retreated to the car ahead of them, but they continued their quest. Just as the rain started falling, they ran back to join me, calling excitedly that they had found a Limpkin!

Of course, I thought they were fooling me, and after the storm’s initial fury subsided a bit, my son-in-law convinced me that they had indeed seen the bird. Still suspicious, I accompanied him in the heavy rain to a ditch about a hundred yards away from the parking lot. Sure enough, there was a Limpkin, politely enduring the downpour as it awaited my return. That Limpkin was our first Florida life bird. In addition, we saw the endangered Snail Kite, which also is dependent upon Apple Snails as its food source.

These Apple Snail eggs were deposited on a suitable plant stalk at Long Key Natural Area in Davie, Florida: Limpkins are quite common at Wakadohatchee Wetlands in Delray Beach… …and at Shark Valley in Everglades National Park: In March, 2008 I found this Limpkin, well camouflaged, on a nest in Loxahatchee NWR. Its mate was standing guard, and I did not approach very closely. Males are known to viciously attack any creature that gets too near, including humans: Our most recent encounter with a Limpkin occurred one morning about two weeks ago while visiting nearby Chapel Trail Nature Preserve in Pembroke Pines, Florida.. We heard two Limpkins calling, one on each side of the boardwalk. To my ear, some of the Limpkin’s cries include rattling sounds somewhat similar to those of the Sandhill Crane, a related species.

Suddenly, one of the Limpkins flew up to the top of a small tree: It then surprised us by flying in our general direction: The Limpkin landed on the boardwalk railing and called again : When I processed the photo, it provided a clear view of the Limpkin’s unusually long and slender tongue: It then flew off in the direction of the second Limpkin: