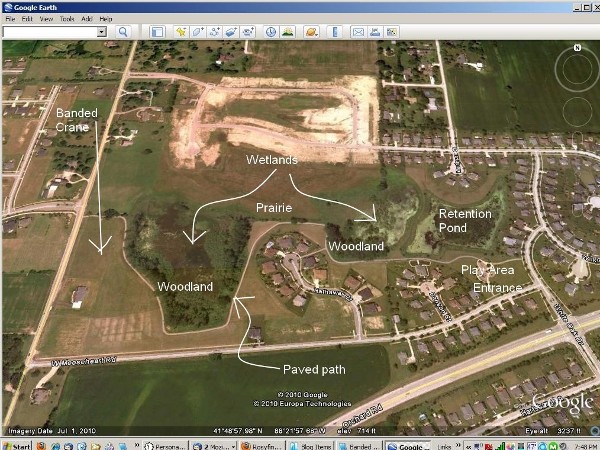 Jones Meadow Park in North Aurora, Illinois is a short walk from our second home. Our granddaughters enjoy playing on the swings and slides. For us it is a small oasis, amid suburban housing and cornfields crowded to property lines without hedgerows to separate them. Wild creatures are attracted to this island of favorable habitat.

An 0.7 mile asphalt footpath winds along the southern periphery of a combination of wetlands, prairie and woodlands. An expansive area of mowed lawn grass serves as a buffer between homes on the other side of the path. Many of the homeowners maintain bird feeders, attractive to sparrows, chickadees and finches. The paved walk is especially welcome during rainy times, when some of our other birding areas can get quite soggy underfoot. A short grassy side path leads north between the pond and the eastern portion of the wetlands, often affording close views of its inhabitants. A Muskrat munches on cattail stems:

Earlier this year, a Sora strolled at the edge of the grassy path, almost underfoot: A pair of Sandhill Cranes spent the whole summer here. Local residents told us they nested at the northern edge of the wetlands, but we never observed nest or chcks (called “colts”). In our experience, most of the cranes travel around in pairs or small (presumably family) groups of two to four birds.

These Sandhill Cranes are most likely the resident pair that we have been seeing at Jones Meadow Park: This past week we encountered a solitary crane in the mowed prairie at the western end of the park. We noted that it had colored bands on the upper portion of its legs: three green bands on the right leg, and yellow, white and silver bands on the left. There were large white letters on the green bands, but we could not read them with binoculars. I took several photographs, and was able to read the letters from the computer screen.

It wore six bands, three on each leg: Reading down, note green bands with white letters A, B, H on right leg, and yellow-white-silver on left leg: I posted this information on IBET (Illinois Birders Exchanging Thoughts) and, based upon feedback about how to report a color banded bird, I contacted Anne Lacy, Long Term Crane Research Coordinator at the International Crane Foundation

Anne referred my query to Brad Semel, Natural Heritage Biologist of the Illinois Department of Natural Resources in Spring Grove, Illinois, who wrote:

“Thank you for providing the photos and detailed information on the bird you observed. Your help in reporting this information is critical in our gaining a better understanding of the movements and survival of sandhill cranes in the midwest. Jeff Fox is a graduate student at the University of Illinois who banded this bird last year. He currently is on vacation, so thought I would step in to help with reporting on this bird so that we could provide you with more timely feedback. The bird was banded on 6/28/2009 at N42 15.606 W87 53.353 in Lake County, IL (you can cut and paste this number into Google Earth and it will take you to the precise banding location). This is actually the site known as Middlefork Savanna. It is a natural area managed by the Lake County Forest Preserve District. The bird weighed 1770g at the time of capture, and was about six weeks of age, just prior to being able to fly. The silver band on the left leg is from the US Fish and Wildlife Service with the number 0679-02076...”

Ken,Attached is a photo of the crane you reported when she was banded (sex determined via DNA).  The last time that I saw her was on 8/7/09 - not far from the nest site at Middlefork Savanna.  You would be the first person to report seeing this crane since that time.  And thank you for reporting it, it’s always great to find out that one of the birds you watched grow up is doing well.  I’m guessing she’ll spend the next several years in unstable flocks, breaking away at her leisure to do whatever she wants whenever she wants (the perks of being 4+ feet tall and capable of flight), before looking for a mate and territory of her own.  Occasionally bullying geese around is also likely on her agenda…funny to watch.If you have any other questions, about this bird in specific or cranes in general, please don’t hesitate to ask.  Again, thank you for reporting your sighting.Jeff Fox

This is the cropped photo attached to Jeff’s e-mail. The chick is blindfolded for its protection (reproduced with his permission):

This is a convenient web site for reporting color-banded birds of any species:


Reporting encounter of a bird with a color marker

Here are a couple of links to earlier blog posts about Jones Meadow Park: