Observers of our local Bald Eagle nest have noted some interesting behaviors. These are personal discoveries. They gain insights into the lives of these magnificent birds, and it matters not that their findings are not new to science.

We learned that, unlike many other birds, the eaglets do not abandon the nest after learning to fly. After their first flight, the adults coaxed the fledglings back to the nest with food. The youngsters returned to be fed at the nest daily for two full months. Sometimes one or both would follow the parent as it carried prey back to the nest. See: Chuck Wagon for Bald Eaglets

They witnessed interspecific competition, as, for example, when an Osprey, probably distressed after an eagle had stolen its fish, chased the larger raptor back to its nest. The eagle did not endanger its chicks by allowing its pursuer to make a close approach. Instead, the eagle flew off until it eluded the Osprey, then returned to feed the fish to the eaglets.

They saw how smaller birds will harass the eagles that roost in their territory by “mobbing” them until they depart. For a video and my photos of grackles ganging up on an immature eagle, see Mob Attacks Eagles.

As a mockingbird attacked an adult, Tom Mitchell captured this striking image, which is used with his permission: 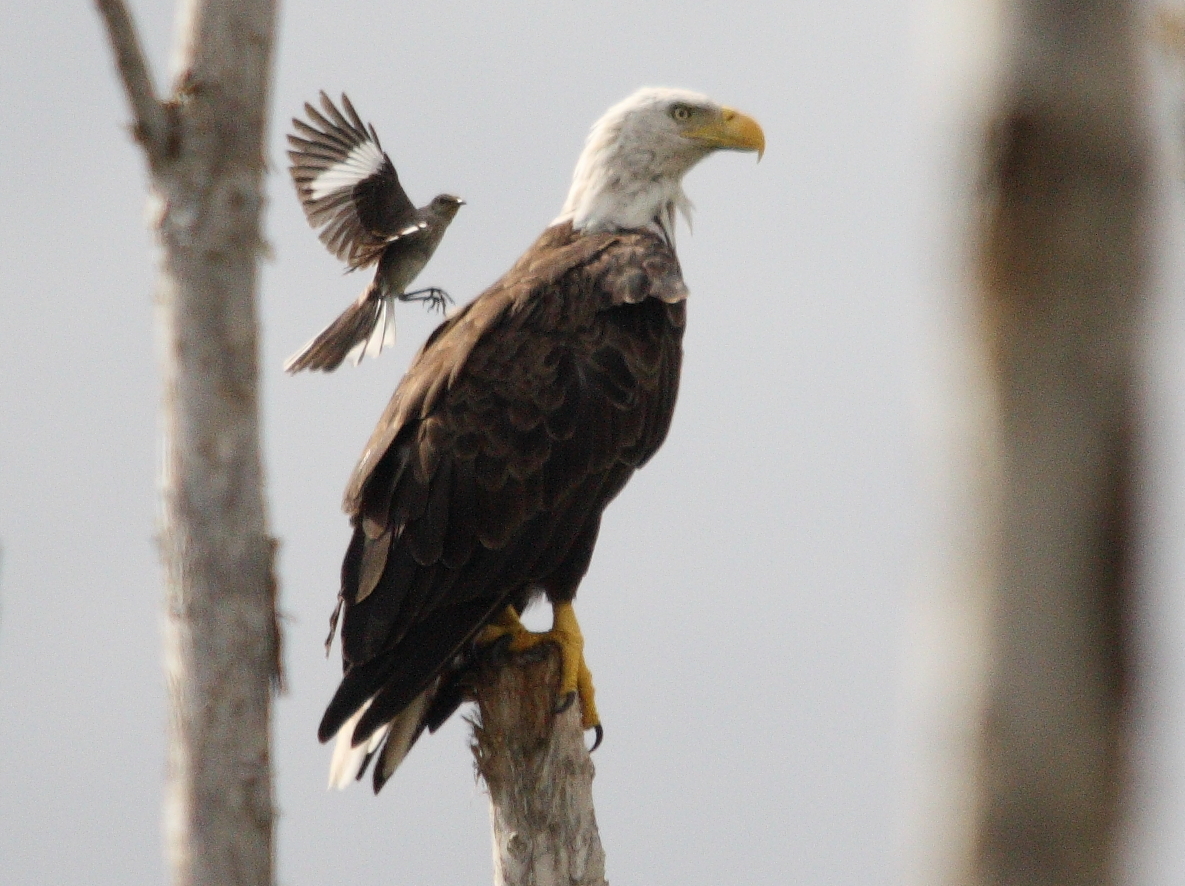 Nest observers followed as the eagles rebuilt their nest this past fall. It had been reduced by summer storms to less than half its size since their last two chicks (“Hope” and “Justice”) departed. Indeed, the birds continually add to their nest, even while incubating the eggs, and especially after the young birds hatch. They often bring in fresh vegetation, including grass picked up from a nearby pasture, to add to the lining of the nest– the avian equivalnt of “sweeping the dirt under the carpet.” We think they may be covering prey remains, or trying to reduce fly infestations.

Major events in the lives of these eagles are recorded on a spreadsheet, with a current report (PDF) which may be viewed at this link. Data for the current 2009-2010 breeding season reveal that nest building began on September 23, 2009, three months before the first egg was laid, on December 18. During the 35 days of incubation, and for about two weeks after the first chick hatched, both birds took turns sitting on the eggs and brooding the eaglet(s) [we have not yet seen them above the nest rim, so we do not know the number], never leaving them uncovered for more than a minute or two. Now, as the young develop to ability to control their own body temperature, they are being left uncovered for longer periods.

Yesterday, Mary
Lou and I arrived 8:50 AM to find one adult on the nest. For the entire
time we watched, until about 9:45, we saw no other adult. Note that the bird now sits higher than when the eagles were incubating eggs, a sign that it is sheltering one or more chicks: We
confirmed it was “Brown-tip,” the male. He got his name because his right outermost tail feather has a dark tip, unlike the pure white tail of his mate. Otherwise similarly feathered, the members of the pair are also differentiated by the greater size and bulk of the female, whose bill is also marginally fatter at its base.

Around 9:10 AM,
the male eagle flew into the patch of dead melaleuca trees just west of the nest, and roosted, for about 5 minutes. Note the brown tip on his outermost right tail feather:

He then took flight, coming towards  Pines Boulevard quite low, just over the power lines.

He flew to one of the Royal Palms on the north side of the highway at the cow pasture, and tore off some dry foliage near the trunk at the base of the crown:

Instead of returning to the nest, still clutching the vegetation in his talons, he flew directly to a dead tree in the cow pasture across from the High School:

He then forcibly grabbed a small branch (sorry for the poor focus, though I did get a sharp view of the High School), which did not separate from the entire dead and brittle limb:

Instead, the branch broke off near the trunk, and was too large for the bird to carry. He held on to it as it began to fall, but had to let go before it hit the ground. In this shot, the branch is still falling. You can see the large diameter of the broken-off stub on the tree by comparing this to the photo two frames above this one:

He returned to the nest “empty-taloned,” and went on to feed the young some prey that was already in the nest: