With his permission, here is Tom Mitchell’s photo (copyright 2009) of one of the adults bringing in a fish: 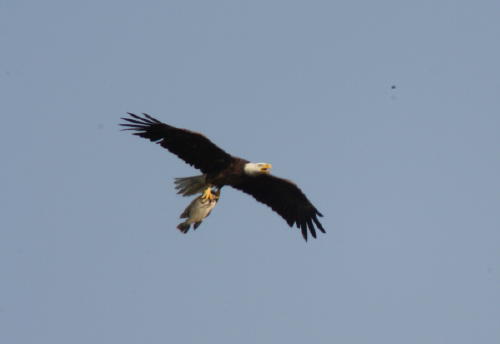 Both of our local eaglets are now flying free, but visiting the nest quite frequently to see if it contains food. Yesterday, one observer saw a very thick cloud of flies around the nest, probably emerging from pupae in the rotting leftover prey. With their keen sense of smell, the vultures also circle around the nest tree, attracted by the carrion, but unable to gat to it. Occasionally, we have seen the adult eagles drive off the vultures by swooping near them but not making contact.

This morning we arrived about 9:00 AM. Neither chick was on the nest, and no adults or chicks were visible nearby or in the Melaleucas. At 9:15 an adult flew into the nest, followed very closely by one of the chicks. Just as the adult was dropping the food, the other chick came in and almost knocked her out of the nest.

The adult quickly roosted on the tree to the east of the nest. Hope, the older and larger eaglet, began eating, and Justice was watching. This was typical behavior for the younger brother. As a small chick, he would wait patiently while the parent first fed Hope, even turning his back during the feeding. At times, the adult would deliberately feed the smaller chick despite the incessant begging of his older sister. We said that Hope, if a human, would have been classified as a “Type A” personality, and Justice as a Type “B.” Indeed Justice exhibited some of the seething resentment and frustration that some human “quiet types” suffer.

As soon as Hope lifted her head up to take a break, Justice quickly grabbed a bit of food. They began to squabble, and then Justice kept to the side. Justice tried this several times but was rebuffed. At 10 AM Hope must have had enough to eat, and flew off. Justice began picking at the leavings. At 10:15 it began to pour rain. We returned to the car, leaving Justice on the nest and the adult female still roosting on the tree to the east. The sky stayed dark and rain continued, so we left at 10:30 AM.

Here, Justice kept calling as if wanting to be fed, while Hope ignored him and continued eating: Hope (L) stood on top of the food, even though she appeared to have eaten her fill: Both chicks appeared quite friendly as they lined up side by side, but Justice had to wait until Hope (in the foreground) took off before enjoying the leftovers: Meanwhile, the adult roosted nearby, and scratched nonchalantly: Butterflies are becoming more numerous in the grass around the eagle nest observation area. This is a Dainty Sulphur: This Killdeer ran along the shore of our backyard lake: