Update on the Rosy-Finches of Sandia Crest, New Mexico. Flocks of all three species are expected to return in early November. Check out the links in rosyfinch.com for more information. 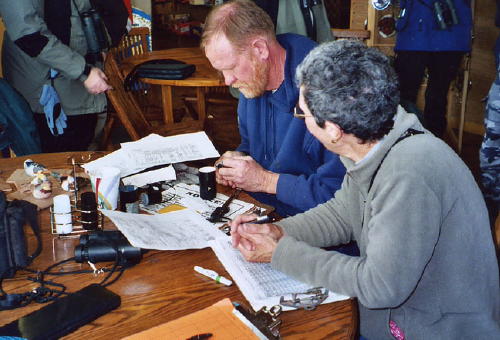 Readers of our rosyfinch.com Web suite know that the rosy-finch banding at Sandia Crest House is conducted by Rio Grande Bird Research, Inc. If you, as I, missed attending their Sandia Rosy-Finch Sponsorship Challenge “Meet the Banders” kick-off event in Albuquerque this past week, you still have the opportunity to contribute to an exciting new research project.  A National Audubon Society grant award to Central New Mexico Audubon Society has already been supplemented by pledges from other major donors for the next phase of the project (notably, Rio Grande Bird Research, Eileen Beaulieu, Central New Mexico Audubon Society Chapter, Robert Munro, Gale Owings, and Wild Bird Center, owned by Lee Hopwood and Nikki Love). This phase is outlined in the grant proposal below.

Nancy and Steve Cox of Rio Grande Bird Research describe Sandia Crest as the premier location in the world to view all three species of Rosy-Finch. “Itâs also the best and most important place on earth to research these birds in their winter habitat. Thatâs where the Rosy-Finch Banding Research Team comes in. Their work could uncover secrets of Rosy-Finch roosting habits and help bird lovers make sure these beautiful creatures are still around to delight our grandchildren.”
The late Ryan Beaulieu, close friend of Raymond, Michael and Cole, exhibits a Black Rosy-Finch to visiting birders from Delaware Valley Ornithological Club (Photo by Naomi Murphy, Copyright 2004, used with permission): 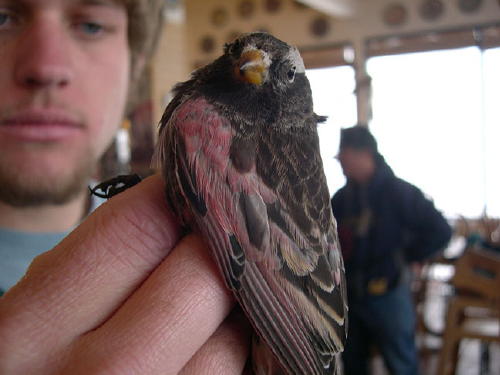 During the Sandia Rosy-Finch Sponsorship Challenge gathering, Raymond Vanbuskirk, Michael Hilchey and Cole Wolf, three young researchers, and master bird bander Steve Cox reviewed the past, present and future of the Rosy-Finch project, and welcomed any donation to the Rosy-Finch cause. “Larger donations deserve special thank youâs: Bring or send us $50 and earn special recognition on the Benefactor Wall, which travels with the team whenever it is bird banding or giving a presentation; bring $100 and youâll get a certificate recognizing your contribution to our environment and the Rosy-Finch Project. This research is overseen by the master bird bander and experienced researchers of Rio Grande Bird Research Inc., a 501(c)(3) nonprofit organization, so all the money you donate is tax deductible to the extent allowed by law.”

You may mail your tax-deductible donation to:Rio Grande Bird Research, Inc,4426 San Isidro NW,Albuquerque, NM 87107.
Central New Mexico Audubon Societyâs (CNMAS)Application For Collaborative Project Funding For FY2008The three Rosy-finch species are some of North Americaâs most sought after and least understood birds. Sandia Crest is the most accessible place in the world where visitors can observe the three species together, while enjoying hot chocolate in the warmth of the crest house. Sandia Crest house has been known as the southern limit of these speciesâ range in the winter, but it is not known if the same individuals return year after year. To answer this question, a research project was needed.In 2003 Ryan Beaulieu and Raymond VanBuskirk initiated the Rosy-finch Project under the auspices of Rio Grande Bird Research Inc. Other collaborative partners are CNMAS, Cibola National Forest Service, Wild Bird Centers of America, the owners and operators of the Sandia Crest House, and dozens of volunteers. Currently the project is headed up by Raymond VanBuskirk, Cole Wolf, and Michael Hilchey, local high school students. Raymond, Cole, and Michael are currently CNMAS board members.For the past five winters under permit from US Geologic Service Banding Laboratory and the NM Department of Game and Fish, we have been capturing, banding, and taking many measurements of the birds, then safely  releasing them, in hopes that they will return in following years. To date we have banded over 1,000 birds and recaptured 47 from previous years. We plan to continue the banding to better answer our original question; we also plan to expand the project by using radio telemetry to study where these birds are roosting at night, where they go when they are not at the crest house feeders, and their general flocking behavior. To conduct this research $ 5,500 will be needed to obtain the proper and safe equipment. The equipment includes radio transmitters and receivers, snowshoes, GPS, and two-way radios. We have obtained $2,000 in funding from other sources, and the money from this grant, in addition to other grants we are applying for, would bring us much closer to our goal.We plan to attach radio transmitters to three birds of each species, for a total of nine transmitters. All precautions will be taken to ensure the safety of the birds. Using the snowshoes, GPS, and radios, two teams of three individuals each will maneuver the mountain slopes, while triangulating the birds with the use of the receivers. After we have found the roost sites we will take observations on behavior, temperature of roost site, habitat, etc.Not only will the data from this research add to ornithological knowledge, but it will also help to educate the public about bird and habitat conservation. Over the past five years the project has attracted dozens of volunteers from around the state, hundreds of birders and Audubon members from all parts of the country, and visitors from as far away as Germany, New Zealand, England, Nicaragua, Ecuador and Australia. Another educational tool that has been utilized by 56,737 âvirtualâ visitors is the rosy-finch website at www.rosyfinch.com. We hope that these visitors to the Crest House, and the website leave with an experience that broadens their love for the natural world, and a commitment to the importance of saving it.