These two male Boat-tailed Grackles, in their characteristic postural
display on the railing of the boardwalk, sun reflecting their
iridescence, reminded me of an Audubon painting. A birder’s definition of a “common” bird is a very fluid concept. As a small kid, it seemed that every new bird that I was able to match up with its picture in Chester A. Reed’s little book, Land Birds East of the Rockies,  was “uncommon,” starting with the discovery that my grandmother’s “chippies” actually had a name: English Sparrow! At eight years old, I dutifully defaced each “new” bird by overwriting Reed’s image of it with penciled block letters : “SEEN.” Read more about my old bird books in an earlier post: Discovering Birds

As a Boy Scout, in the winter of 1948, I suddenly decided to keep an orderly list of the birds I saw. With Monkish precision I drew grid lines on 4×7 loose leaf sheets, with headings: “Name of Bird… Date Seen…Where the Bird was Seen… ,” and numbered each entry.  I used my date stamp as if it had the power of a wax seal that certified the authenticity of my sightings. Here is the cover; click on it to see the first two pages.
. 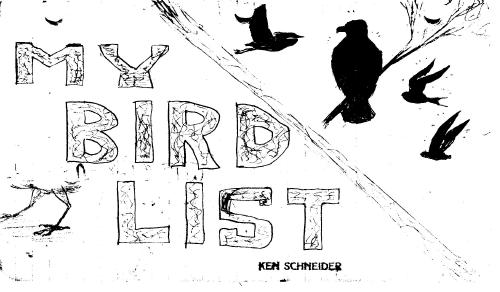 The wild places of my New Jersey neighborhood, each with its special name and once so familiar, are nearly all gone now. The second page of my ledger brings vividly into memory my Lincoln’s Birthday sighting of a (Common) Redpoll, and references a clipping in the local paper that recognized my accomplishment, proudly supplemented by quotations from Allan Cruickshank’s Birds Around New York City, which states: “This northern finch… is a decidedly irregular winter visitant, usually very rare.”  The Redpoll’s expansive grassy plain, where the Erie Railroad bridge used to cross the Passaic River, now gets a  weekly manicure, and hosts a football and soccer stadium.

Since I already knew how to identify many birds, I had to wait until spring before I could honestly log them for the “official” record: ten on December 5, six more in January, nine in February, six more in March, an amazing 24 in April, and a glorious 61 in May! My list had reached 115 species, and each new addition became increasingly “uncommon,” at least in my experience. Later I was to go over the list, crossing out duplications such as “Blue Goose,” (as I had already logged in a Snow Goose), “Redhead Duck” that tamely loafed into summer with the Mallards in a Verona pond (because I had lingering doubts about whether it was truly a wild bird), and “Lawrence Warbler” with the notation that it was “A HYBRID- NOT A SPECIES.”

Yesterday, a “mudhen,” or Common Gallinule as I first learned to call it (now Common Moorhen), looked out at me through the vegetation. Golly, it is nice to stop and notice how another “drab” and common bird can be so colorful. Yesterday morning I had an hour to spare and on my way home from the auto service shop I stopped at a small wetland next to the Southwest Broward County Regional Library in Pembroke Pines. This spot has a nice boardwalk and sometimes harbors bitterns and Limpkins. I had a goal in mind, and that was to spot one more exotic Purple Swamphen before the last of them was gunned down in the extermination program. I had no luck with the swamphen, and when I saw no Purple Gallinules I worried that maybe the shotgunners had not discriminated between them and their larger purple immigrant relatives. However, all birds were few and far between, not too surprising since it was already nearly noon.

Partly because I waited to see if the swamphens might peer out of the sedges and sawgrass, and also because the day was overcast and pleasant, I did linger much more than usual. As a result, I saw and photographed scenes that otherwise might have passed without notice. Two raccoons were cavorting in a tree: They were just the flowers of pond weeds, but I took a closer look at the Pickerelweed I have a soft spot in my heart for this little honeybee visiting the Arrowhead. At our home at 7000 feet elevation in New Mexico, honeybees had trouble making it through the winters. We had a long-standing colony living in the rood of a neighbor’s shed. He ignored them until early one spring, when a bear tore away most of the shingles and roof deck in search of  honey. A beekeeper (or more probably, an exterminator) removed the bees and, thereafter, we rarely saw them in our garden.