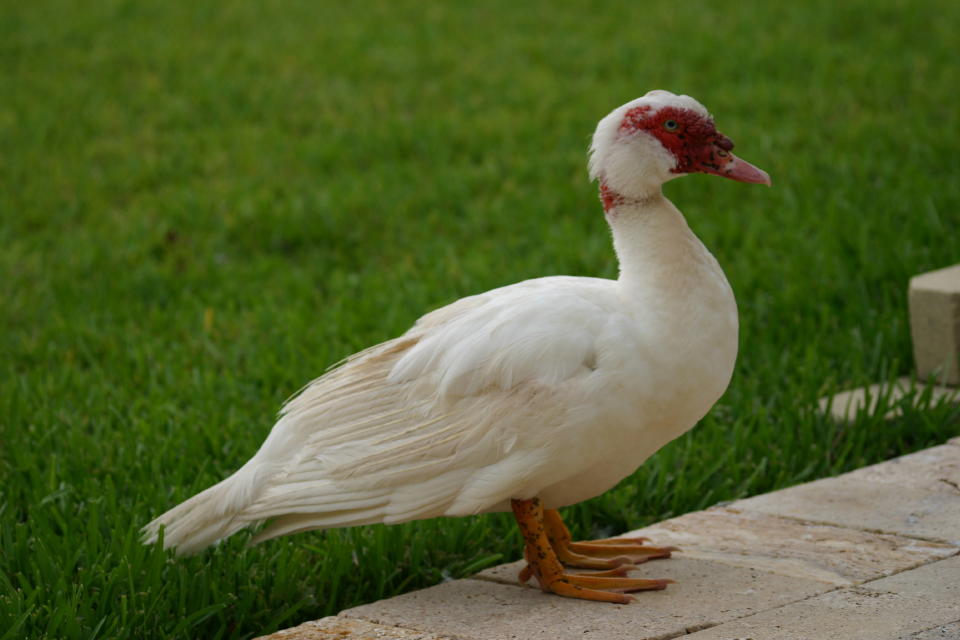 The feral Muscovy Ducks that inhabit our 10 acre  South Florida lake are the easiest, and sometimes the only birds to permit me close observation of their life cycles. We rarely see the common barnyard Mallard-stock Pekin Duck in our neighborhood. After Easter a few may show up, but they quickly disappear, most likely falling to predators. Unlike Pekin Ducks, which are tame and flightless, the Muscovy is quite wary and flies energetically. Since Muscovies evolved in the neotropics, they lack fat deposits and their breast meat is valued at table and said to resemble fine veal. Breeders cross Muscovy with Pekin Ducks to create “Mule Ducks,” which are usually infertile, for their meat and production of  pÃ¢tÃ© de foie gras. This duck I photographed last week was very likely such a hybrid: During the nearly four years we have lived here, I have observed well over a hundred individual Muscovies that survived beyond the downy stage. The ducklings have an extremely high mortality rate, serving as food for raccoons, turtles, large bass, hawks, Wood Storks and larger herons. As I have noted previously, the adults also engage in infanticide (see Purposeful Infanticide? ), perhaps in response to population pressures. This is a good thing, since clutches are usually a dozen or more! Despite this, last summer our lake became quite overpopulated with adult Muscovies, with perhaps as many as 50 or 60 adults crowding the shores and wandering the streets of our subdivision. Their population boom was abruptly terminated by a massive die-off, possibly due to botulism. (see Muscovy Mortality) Their numbers have not increased very much since– there has been nearly 100% mortality of all the broods that have hatched out since then. (see New Boss Duck but no Babies ).

Since I enjoy bird watching even more than bird listing, the fact that the American Birding Association does not consider these birds as “established” (as it does our Rock Pigeons and Monk Parakeets) does not prevent me from observing and enjoying their behavior, particularly their territorial and nesting habits. Their plumage is also interesting.

Wild Muscovy Ducks, found as far north as the Lower Rio Grande Valley of Texas, are all black with conspicuous white wing patches. The feral populations in my neighborhood are mostly black with white head and neck, and variable amounts of white on the breast and other parts of the body. A few are nearly white. They have more or less extensive bare red patches on their faces. In males, the red skin is swollen into “caruncles” that sometimes protrude like globular turkey wattles or chicken combs.

So far, I have seen only two pure white Muscovies, and both were drakes. This led me to the unscientific conclusion that the pure white color must be a sex-linked recessive, based upon my knowledge of human chromosomes: women carry two X chromosomes, and men have a Y and only one X chromosome. Sex-linked, I reasoned, because the trait only seemed to appear in males, and recessive because the gene would need to be present in both parents’ gametes in female offspring. Was I ever wrong! A little research revealed the depth of my ignorance, and the danger of drawing conclusions from  uncontrolled observations. While the male/female XY/XX pattern holds true in people and mammals and fruit flies, just the opposite occurs in birds, reptiles and butterflies.

In fact, it is the female duck that is heterogametic (produces gametes that contain one each, of two types of chromosomes). My Muscovy drakes carry two long “Z” sex chromosomes and females have a Z and a shorter “W” chromosome. Therefore, any sex-linked recessive trait would only be passed on to a female by a father who carried the gene on one or both Z chromosomes, or to a male whose mother carried that gene on her single Z chromosome. As it turns out, white color in Muscovy Ducks appears to be inherited as an autosomal recessive trait. Interestingly, the gene that causes Muscovies to have white head and necks is an autosomal dominant, accounting for the coloration of the vast majority of the ducks on our lake. (Reference:
http://www.domestic-waterfowl.co.uk/mozzie.htm )

In my anthropocentric view, only the Phalaropes had it right, considering plumage and behavior. The brightly colored female was heterogametic “like a man.” However, the male sex, as defined biologically, is the partner that donates the gamete, and the female receives it.  As the saying goes, you are never too old to learn something new! The field guides need not be corrected.

One result of my search of the literature was to discover that, of the few sex-linked plumage variations that are compatible with survival in Muscovy Ducks, one is “chocolate color,” or “brown dilution,” where one or more recessive genes suppress all or most of the black pigment (eumelanin), allowing the reddish and brown pigment (pheomelanin) to be expressed. I must now look for it in females, NOT in males! Birding Magazine (Sept-Oct 2007) had a good article on pigmentation and its biologic basis by Jeff N. Davis: Color Abnormalities in Birds: A Proposed Nomenclature for Birders.

2 Responses to “Are Phalaropes Properly Sexed?”