Many people across the country and the planet are monitoring the progress of a pair of Bald Eagles in Decorah, Iowa. A nest camera with excellent video quality is mounted in the nest tree and looks directly into the nest, 80 feet above the ground. As the 35th day of incubation drew near, Mary Lou and I were continually checking the three eggs for signs that an eaglet was pipping the shell.

The first eaglet hatched out on  April 2, 2011 (this is a screenshot from the Decorah nest camera): We have a particular interest in Bald Eagles, as we have been involved in protecting a recently discovered nest in our south Florida neighborhood. Coincidentally, the eaglets in our local nest are just taking their first flights as the Decorah eaglets are hatching. We first became aware of the local pair of eagles when I photographed them mating on the rooftop of a house just across the lake from our home. As there had not been a record of an active Bald Eagle nest in Broward County since several years before DDT was abolished in the early 1970s, I reported the sighting on the Tropical Audubon Society’s Web page. A biologist who lived about 1 1/2 miles from our home got back to me with word that she had been seeing eagles in her neighborhood. She had a general idea of where they might be breeding, but was unable to find their nest. By chance, Kelly Smith, a local middle school teacher found the nest in March, 2008. The nest was located only about 150 feet from a busy boulevard in the neighboring City of Pembroke Pines, and it contained one nearly full-grown eaglet. 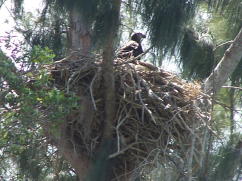 Residents in the area of the nest had been seeing eagles for at least a couple of years before the nest was “discovered,” but no one ever pinpointed its location and reported it to the Florida Fish and Wildlife Conservation Commission (FWC) which is charged with protecting the eagles under federal and state laws and regulations.

The pair of eagles have returned to the same nest each year, successfully raising and fledging two chicks in 2009 and three in 2010. This past October they again set up housekeeping, and have produced two more eaglets. Since the nest is about 50 feet high in an exotic pine tree with smaller trees blocking most of the view, we only can obtain distant looks. Oh, how we would like to have an eagle nest camera on a par with the Decorah cam! Our local “Pines” nest could kick off the viewing season before Christmas and be followed by shows from more northerly locations. The Mayor took an interest in the nest, which is located on City of Pembroke Pines property. The media hyped the story, increasing the crowds and the threat to public safety, leading to restrictions for pedestrians and motorists in the area of the nest. The Mayor announced his intention to declare the site a City Bald Eagle Sanctuary, and appointed a steering committee to provide advice on measures to protect both the eagles and observers.

The Bald Eagle Sanctuary Steering Committee embarked on a (so far) unsuccessful attempt to install a web camera. Prospective funding sources evaporated, and the power company backed off from their earlier assurances to sponsor and permit a camera on a pole directly in front of the nest. Likewise, plans for support by the state highway authority to fund a camera fell through. The good news is that the City has amended its planning documents to pave the way for an ordinance that will provide safeguards against disturbance of any eagle nest in the city.

The Mayor views the nest with a reporter and a news photographer: 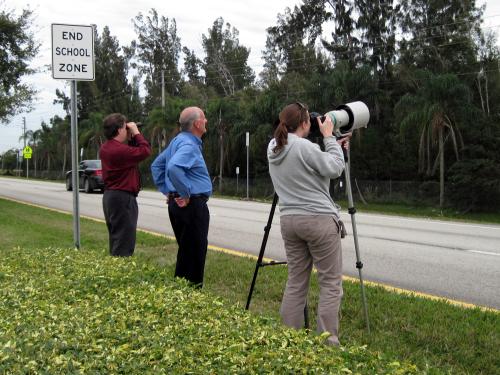 Here, it waits as its parent tears off a bit of food. A younger sibling has not yet been visible from the ground: This was about as good a view we could get from 150 feet. Plans for a nest camera did not materialize: Less than two weeks later, on February 27, the eaglets look almost as large as adults. We call them “P. Piney Seven & Eight.”  Bald Eagles exhibit sexual dimorphism that starts when they are nestlings, with the females usually considerably larger than males. PP 7 is the larger and is presumed to be a female: At two and a half months of age on March 23 they are exercising their wings, preparing for their first flight, which usually occurs when they are between 10 and 12 weeks old. PP7, on the right, has more white underneath than her younger brother: Here, on April 3, 2011, PP7 roosts in a tree next to the nest. PP8 is flying on branches in the nest tree but has not been observed in free flight: * In estimating the timing of the laying of eggs and hatching of the eaglets, we must depend upon clues from changes in the behavior of the adults. The onset of incubation coincides with the laying of the first egg, which is when we suddenly see one of the pair down deep and immobile in the nest. Hatching is a time of excitement, as the parents shift position frequently, peer down into the nest, and they start bringing in prey and tearing off bits to feed the tiny chick. The adults also sit a bit higher in the nest after the first egg hatches, supporting themselves on their wings to form a “tent” to shelter the chick and yet provide warmth to any eggs that have not yet hatched. Volunteer nest observers share their sightings in the Pembroke Pines Eagle Nest Watch FORUM at this link.