Saturday Sunrise from our back patio: The weather report was not encouraging. Storm clouds over the Atlantic coast produced a beautiful sunrise. Optimistically, we set out for nearby Chapel Trail Nature Preserve in Pembroke Pines. Skies were gray and there were occasional misty drizzles as we walked along the boardwalk.

A Red-shouldered Hawk screamed incessantly from the top of a melaleuca in the adjacent pasture. We had no ideas as to what was bothering it.

The light was so poor that I had to brighten up this photo of the noisy hawk: A male Northern Cardinal contrasted with the gloomy sky: An Anhinga tried to dry its feathers, but the rain picked up: We made a hasty retreat to the car just as a downpour began.

The next day, the clouds had lifted and there was less red in the morning sky: Mary Lou still wanted to make up for missing the Ovenbird. After our pre-dawn “power walk,” we walked out to the birding “patch” next to our subdivision.

She walked ahead of me on the grassy path next to the berm that runs along the unpaved portion of Miramar Parkway (in the background to the west is the wetland, part of the Broward County Water Conservation Area, that we call the ESL “West Miramar Environmentally Sensitive Land (ESL)“: They were joined by a male American Redstart: A Ruby-throated Hummingbird perched nearby: This immature female Prairie Warbler lacks the streaking that is characteristic of adult birds: A White-eyed Vireo started singing right in front of us. I captured it in an unconventional pose: While we were occupied with the vireo, Mary Lou spotted an Ovenbird, then another, lurking in the shadows under the shrubbery. I was delighted when it walked out into the open: That evening (Sunday) we watched the Key West radar for migrants. A fair number of birds were departing from the lower Florida peninsula in the direction of Cuba. Ominously, they were headed into a line of rainstorms. We wonder how many made it to Cuba that night:

This screenshot shows the direction of the flight as well as that of the storms. Green echoes are moving towards Key West, while the red returns are moving away. It suggests that some of the migrants, just due south of Key West,  have either turned around or are being blown back northwards: 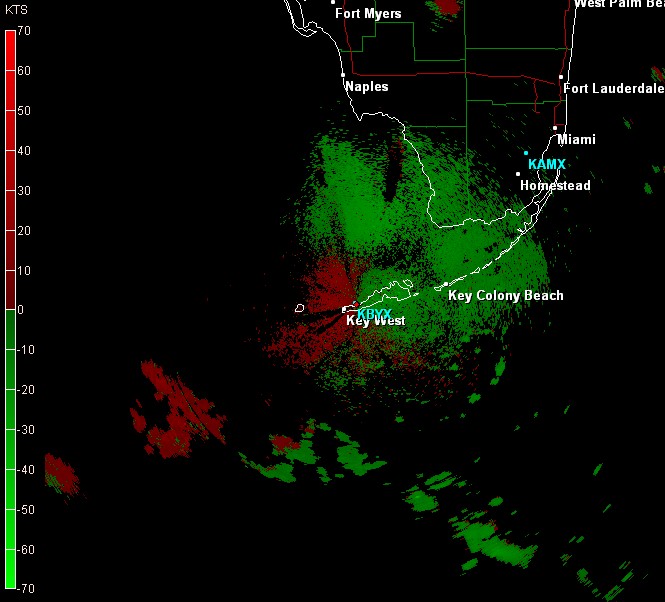