Tom Mitchell captured this image of an adult bringing a fish to both chicks in the nest on Saturday morning, May 23, 2009(c) 2009 Tom Mitchell, used with permission 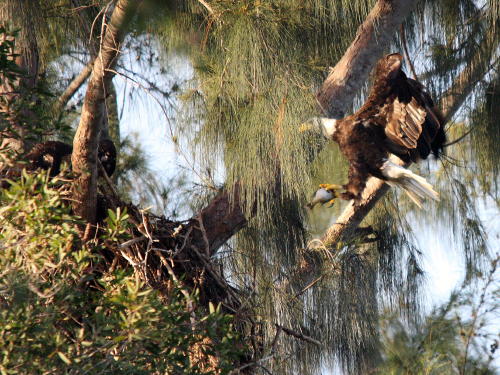 We arrived in Florida late on Wednesday, and got out early the next morning to check our local Bald Eagle nest. The chicks (named Hope and Justice in a nationwide poll) are 18 weeks old this weekend. They fledged at 11 weeks of age, and usually spend the night in a roost together near the nest tree. They still return to the nest for occasional feedings. The portions brought in by the parents seem to be smaller and are offered less frequently. Although none of the observers has seen either of the eaglets with prey, we must assume that they are learning to hunt for themselves.

When we got to the nest at about 8:30 AM, no eagles were in sight, but within a few minutes both of the youngsters flew in and roosted in trees right along the road.

Justice, the younger sibling, followed his older sister to the tree: Hope is a lighter brown, and both chicks’ beaks are starting to get yellow at the base: Heavy rains have limited observation of the nest for the past two days, and we stayed at home . This afternoon there was a break in the weather, and two  Double-crested Cormorants fished near the shore of our backyard lake. They attracted both a Tricolored and a Green Heron. I captured an interesting sequence of photos as the Tricolored stalked and then caught a small fish. The bird swallowed the fish in a blink of the eye. The last three photos were taken within a two second interval, from 4:06:06 and 4:06:08 PM EDT!

With the sun at its back, the Tricolored Heron intently watches the water, stirred by a brisk breeze. “I see the fish!”: It strikes and succeeds (click and select larger size to see the water droplets frozen in space). “I seize the fish!” (04:06:06 PM): A Green Heron fishes patiently nearby: