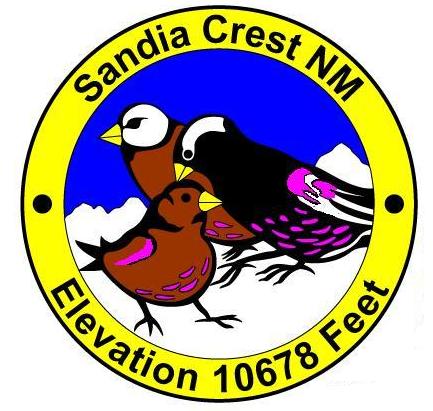 Today Mary Lou and I got word that the rosy-finches had just returned to Sandia Crest, at the top of the Sandia Mountains that stand just east of Albuquerque, New Mexico. Mountain snows came early this year, perhaps hastening the arrival of these winter visitors, usually not seen until the middle of November. Reported abundance of birds often bears a direct relationship to the number of people who are looking for them, as Christmas Bird Counts seem to demonstrate. The same may be true for the rosy-finches at Sandia Crest, which have been reported earlier nearly every year since 1999, when birders started looking for them regularly.

The news, received by us here in sunny South Florida, brings on nostalgia. We will not soon put away the memories of our many trips up the mountain to see and to feed these hardy finches that, not many years ago, were considered uncommon to rare on that same mountain. Of course, the birds were always there, but by putting food out for them and thereby attracting not only three species of rosy-finches but also their watchers, we created the illusion that the bird suddenly had become âcommon.â  We merely concentrated the birds as well as the birders, and the whole became more than the sum of its parts.

We have since traded a view of the mountain for one of a lake, and our back yard birds have changed drastically, from Stellerâs Jays, Juniper Titmice and Evening Grosbeaks to a variety of egrets, Anhingas and Wood Storks. In Florida, November marks the transition from the hot, wet season to the delightful, arid winter.  We do miss the four distinct seasons of the New Mexico mountains. And we miss our âRosies.â