Yesterday we drove down to Everglades National Park in pursuit of a rare vagrant bird, the Northern Wheatear (Oenanthe oenanthe). A relative of the American Robin and thrushes, this species is one of few that may choose to nest in a hole in the ground. Millions breed in northern, central and Eastern Europe, but in the Western Hemisphere they breed only in far north Alaska, the Yukon and across the Arctic tundra. Their pattern of migration is interesting. Birds that nest in far northeastern Canada migrate to the east, across Greenland into Europe, to winter into Africa. Those nesting in Alaska and the Yukon fly west to Asia across the Bering Sea, also wintering as far south as Africa. Normally, they do not enter southern Canada or the lower 48 states.  Rarely, they straggle south into the northeastern US, and exceptionally are found farther to the south, usually in the fall.

Over the years, only a handful of these birds have been known to wander into Florida, and none had ever been seen in Everglades National Park. But it happened last week. On September 14, word went out on the Tropical Audubon Society Miami Bird Board that on the previous day, a Northern Wheatear had suddenly appeared on the lawn of the Daniel Beard Research Center not far from the main entrance of the Park. It was seen and photographed daily; excellent photos are posted on the TAS Web site. Mary Lou and I were anxious to go, but circumstances kept us near home until yesterday, when we drove 55 miles south to the Bill Robertson Center, where the bird had been seen the day before.

We were rewarded immediately with great views of the bird, which was in first fall plumage. From a distance, it appeared surprisingly non-descript, a warm brown and somewhat short-tailed bird that ran upright in spurts, robin-like, across a recently mowed field, exploring the small piles of cut grass. It frequently took short flights from one hummock to another, displaying a prominent white rump and outer tail feathers. Through the binoculars and spotting scope the bird appeared quite beautiful. A dark line ran through its eye and widened over its ear coverts, and a subdued white eyebrow ran on top of that.  The tip of its tail was black, accentuating the contrast between the white and creating an inverted T-shaped marking. My digiscopic photo (taken through the lens of my spotting scope using an adapter I had fashioned out of a Durkee’s spice container) did not turn out very well, but, hey, it’s all mine!: 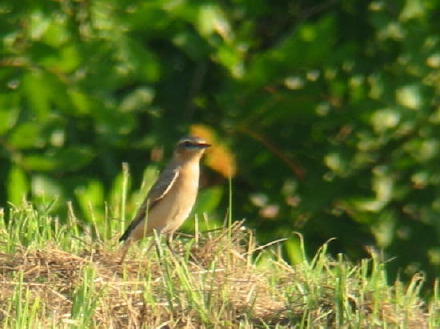 I had always assumed that the wheatearâs name was derived from the markings on its face, fancying that someone thought they resembled a curved shaft of wheat. Nope, according to  birdguides.com âIt is said that the name Wheatear derives from the expression ‘white arse’, a perfect description of how this bird appears as it flies away.â Perhaps “white rear” is etymologically closer.

This fall, wheatears have shown up in eastern Canada and some northeastern states earlier and in larger numbers than normal. Local birder Robin Diaz found a post in birdingonthenet.com Frontiers of Identification, in which Ian A. McLaren, commenting on this fall’s unusual influx of Northern Wheatears in Nova Scotia and Newfoundland, postulates a reason: âintense northerly windflow in late August that deflected birds bound for Europe (or for N Africa by wheatears) southward from northern Nunavut or Greenland.â This map linked to the Newfoundland birds Google Group shows this year’s North American sightings.

How many Northern Wheatears have actually wandered into Florida this year? It seems likely that these solitary and relatively non-descript birds (at least to the untrained naked eye) would not stand out if seen by ordinary citizens, running across a recently mowed fields on private property. Reports such as this must represent only a rather small sample of the number of birds actually out there somewhere. Seeing the wheatear was on a par with our experience almost exactly three years ago, in New Mexico, when we saw and photographed another extremely rare vagrant bird, the Piratic Flycatcher– only the fifth time it had ever been reported in the US..